Well, the meal I would like to talk about was the farewell dinner for a good friend of mine. Since he was about to go off to Canada for a few years to start university there, he invited a few of his close friends for dinner before heading off.

And one of the reasons I’ve chosen to talk about this meal instead of some of the others I’ve been to is simply that it’s still quite fresh in my memory. You know, it was only about a couple of weeks ago when it happened. And it was a really nice restaurant that we went to, definitely one of the best in the city. So I was kind of relieved that it wouldn’t be me footing the bill.

Anyway regarding what we ate, well I couldn’t tell you every single dish that we had, because there was just so much, you know, the whole table was covered with food. I mean, there was crab, chicken, duck, what else, um,……oh yeah, shrimps, and, uh…..oh and a whole load of different vegetables. So by the end of it, I was absolutely stuffed.

But anyway, finally, in terms of how I felt about the meal, well to put it simply, I really enjoyed it, because as well as the food, which was fantastic, I really enjoyed everyone’s company. You know, it was great being together with so many good friends, many of which I hadn’t seen in quite a while.

So yeah, all in all, it was a really special evening, and I’m extremely grateful to my friend for his generosity, as the bill must have come to quite a lot. 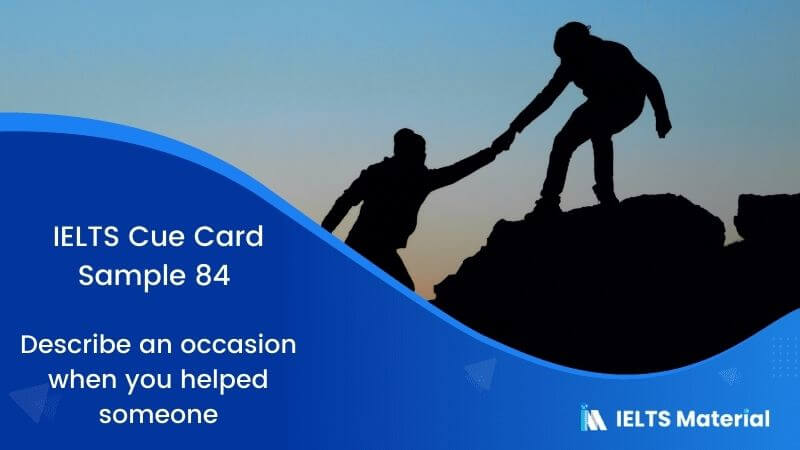 IELTS Cue Card Sample 84 Topic: Describe an occasion when you helped someone

Describe an ambition you have not achieved yet: IELTS Cue Card Sample 100