The Writing Test can be reused in different countries; therefore, you should practice all the past exams in other countries to be well-prepared for the IELTS test. 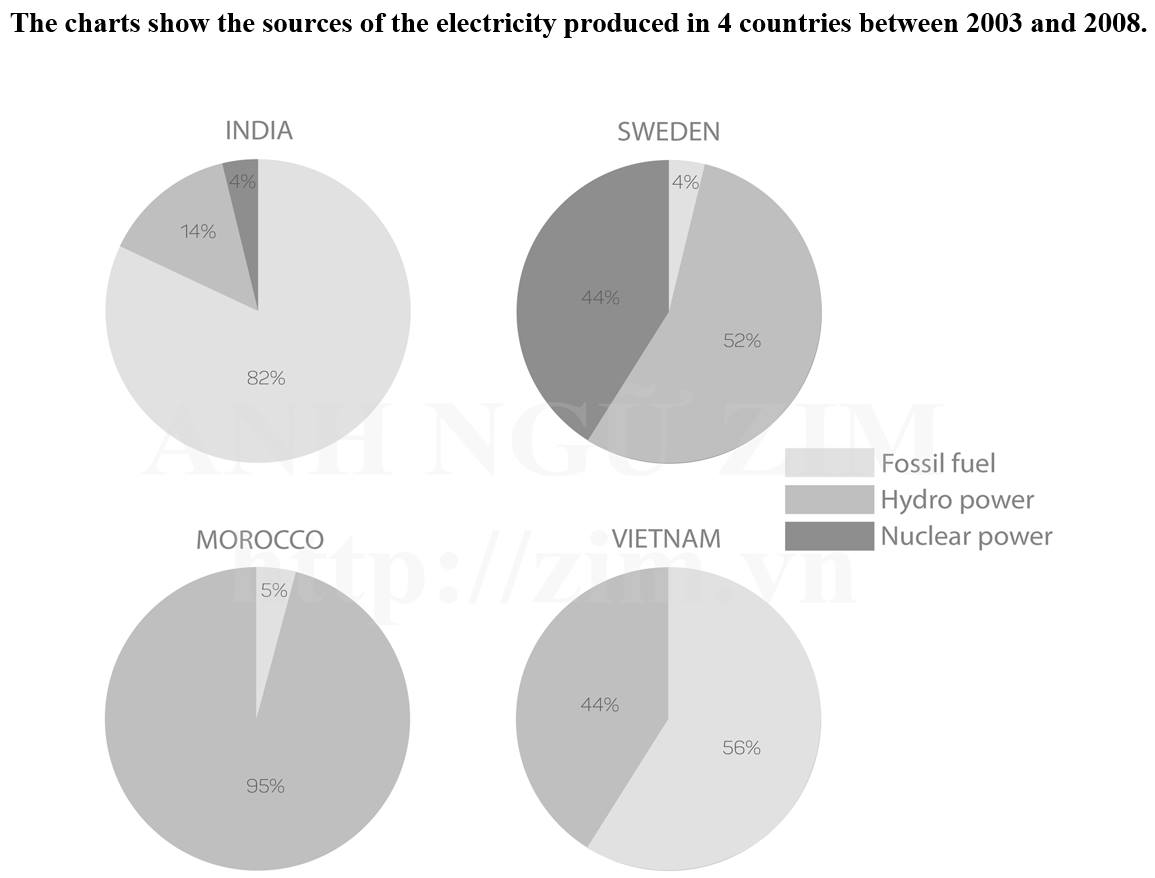 The given pie charts give information about the proportion of three different sources that were used to produce electricity in four countries, namely India, Sweden, Morocco and Vietnam, from the year 2003 to 2008.Overall, Vietnam and Morocco did not use nuclear power for electricity production.

It can also be seen that while fossil fuel was the largest source of electricity supply in Vietnam and India, it only occupied a relatively marginal proportion in the other two countries during the examined years. In Vietnam, 56% of the total amount of electricity was from fossil fuel, and only 5%, however, was the figure for Morocco. The rest was produced from hydro power in both nations.

Between 2003 and 2008, fossil fuel contributed 82% to the entire quantity of electricity in India, which was also the highest among the four countries. Meanwhile, this source was responsible for the smallest proportion in Sweden, where hydro power constituted the biggest, at 52%. Nuclear power was used to generate 44% of the amount of electricity in Sweden while the figure for India was merely 3.5%.

In schools and universities, girls tend to choose arts while boys like science. What are the reasons for this trend and do you think this tendency should be changed?

There has been a difference in subject preferences between girls who often enroll in art classes and boys who tend to study science. This could be explained by several elements, and I think that it is best not to apply any changes to this tendency.

The aforementioned situation can be attributable to gender-specific personalities and competence. First, female students are usually attracted to subjects that require tremendous self-discipline and patience like language classes while male students share a common interest in several fields that need considerable analytical abilities to excel at, for example physics or math. Second, it has been proven that each of the two sexes shows distinct competence and excellence at their favored types of subjects. And students certainly choose to participate in classes that they are best at, which is why boys and girls choose different courses to study.

In my view, it is rather unnecessary to make changes to this trend. Initially, students choose the environment where they can best cultivate their aptitudes. Therefore, if they were forced to take part in unwanted classes, it would produce undesirable outcomes, especially resentment or negative attitudes toward study at school. Furthermore, students, regardless of gender, should have their freedom of choice. In other words, they should be at liberty to decide what courses they can attend so that they would feel that they are respected and listened to.

In conclusion, distinct characteristics and competence between males and females are the causes for the two tendencies toward choosing preferable courses to study at schools or universities, and students should be entitled to participation in any class they find suitable.