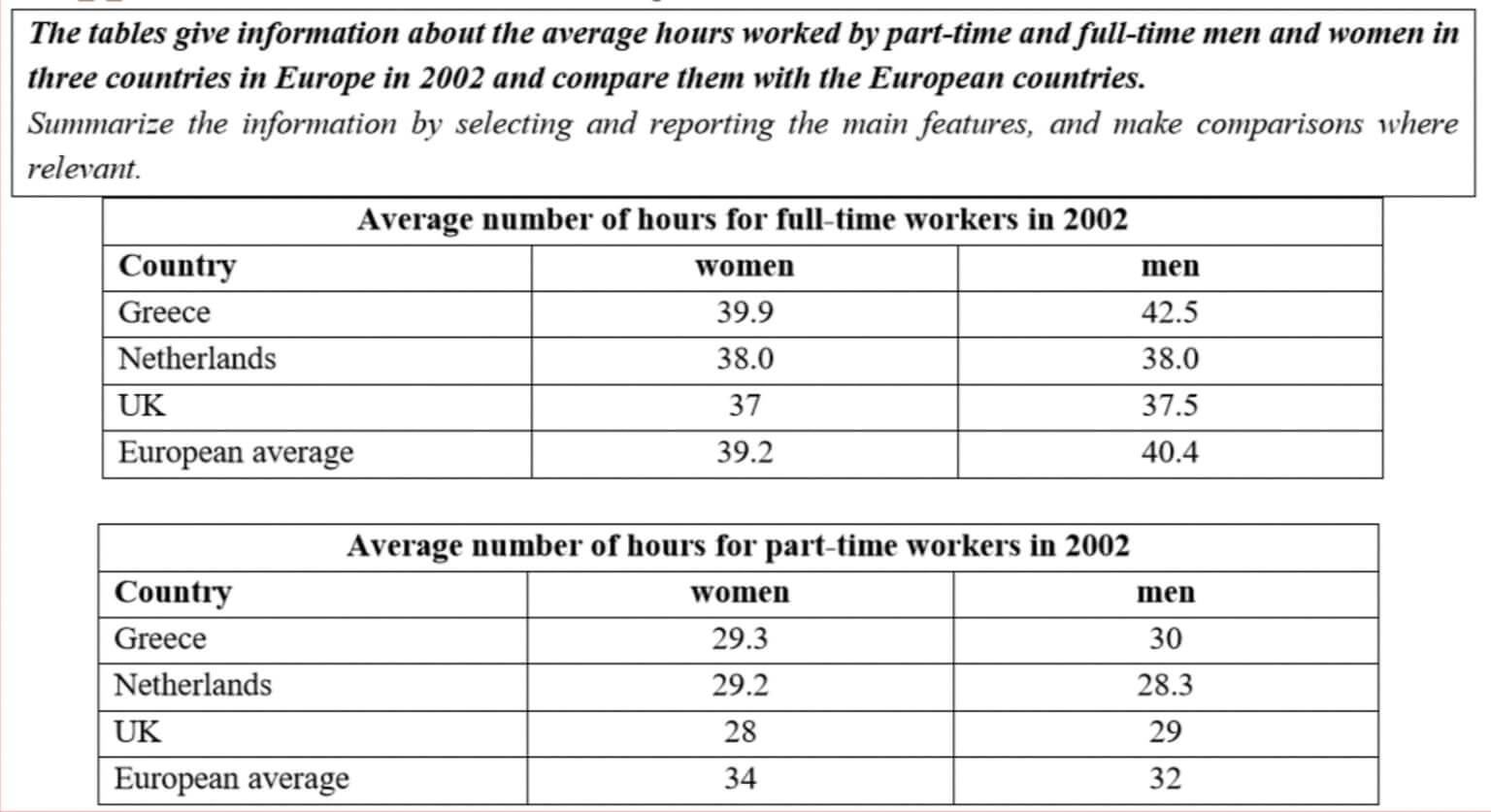 The given two tables indicate the average amount of time which both full-time and part-time employees worked in three distinctive European nations in the year of 2002 compared to the average number of hours dedicated to jobs of European citizens.

Overall, the tables point out that men, regardless of their types of jobs, usually spent more hours working than women. The Greek employees appeared to be the most career-devoted ones while UK citizens enjoyed shorter working time.

The longest working time was observed in Greece where female workers worked 39.9 hours on an average, around 2.6 hours less than their male counterparts. This amount was noticeably higher than the European average figure of 39.2 hours for females and 40.4 hours for males, in contrast to the other two nations with shorter working time. Dutch women and men allocated an equal amount of time — 38 hours – for work, 1 hour and 1.5 hours longer than their UK counterparts.

With regard to part-time jobs, citizens in the three listed nations devoted smaller and comparable amounts of time to their career compared to the European average. The Greek stilled worked hardest, with 29.3 hours spent by women and 30 hours by men, slightly longer than the figures for UK citizens. It is interesting that only in the Netherlands were females more committed to their part-time jobs (with 29.2 hours) than their male counterparts with less than one hour in difference.

Over the last centuries, reading, writing and maths are the three recognized traditional subjects. Nowadays, as computer becomes more important, some people believe that every child should be taught computer skills as the fourth subject. To what extent do you agree or disagree?

Ih the context of the ever-changing world, it is believed that conventional subjects like reading, writing, and maths are no longer sufficient for children’s development that computer skills are suggested to be considered equally crucial. I hold a strong belief that these four subjects play an important role in children’s education.

It is irrefutable that traditional subject are essential for children’s overall development. Throughout history, several aspects of life have only required people’s ability to read, write, and solve math questions in order to survive and lead a normal life. Literacy has always been the key for people to access information through written sources, express their opinions, or communicate with others through writing pieces. In addition, numeracy is sufficient for traders, retailers, and buyers to conduct trading. This was simply because information was shared and stored in handwritten books or pieces and only simple mathematic calculations were required to carry out transactions in the real life.

In addition, I am convinced that computer skills are also equally vital to children’s development in the current digitalized world. It is obvious that technology has transformed all aspects of our life tremendously, bringing all operations, transactions, and tasks to perform on computer systems or online. As a result, acquiring computer skills is a must in the changing world that seldom does any company recruit an employee unable to do basic tasks like sending emails or using excel to calculate. For that reason, early exposure to computer literacy at school could allow children to be familiar with and master these critical computer skills for future job requirements. Without such preparation, even if having excellent ability to read, write, or calculate, they might face challenge in dealing with common computer-based tasks in different life, study, and work situations, thus losing their competitive advantages in the long run.

In conclusion, I am of the opinion that a curriculum incorporating conventionally fundamental subjects related to literacy and numeracy together with the fourth most important field – computer literacy is a strategic educational approach for children in the modern context.