In the IELTS speaking test idioms can really help boost your IELTS Speaking score, if you can use them properly.

Let’s take a look at the below picture showing a part of band descriptors for speaking. 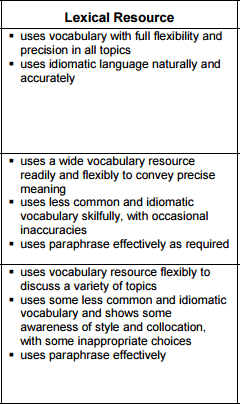 The 3 bands of above are 7, 8 and 9. As you can see, using idioms, even with some inappropriate choices, is typical of a band 7 candidate. By using them skillfully, with only occasional inaccuracies you are likely to get an 8 in this category. Rarely students use them perfectly and this is typical of someone who reaches a 9.

So let’s examine the meanings and usage of 10 popular idioms to hike up your IELTS score and expand your grasp of the English language.

Make a beeline for

Go rapidly and directly towards.

The bee was supposed to fly in a such a way when returning to its hive.

The hungry tourists made a beeline for the buffet that featured delicious food from all over the world.

Jump (or climb) on the bandwagon

Join others in doing or supporting something fashionable or likely to be successful.

Bandwagon was originally the US term for a large wagon able to carry a band in a procession.

When your TV show does extremely well, advertisers will be competing to be the first to jump on the bandwagon.

Off (or way off) beam

On the wrong track; mistaken.

Originally, referring to the radio beam or signal used to guide aircraft. The opposite is on the beam.

I lost the bet as my prediction was way off beam.

At someone’s beck and call

Always having to be ready to obey someone’s orders immediately.

Beck in the sense of “significant gesture of command” comes from the verb beck, which is shortened form of beckon and is now found mainly in this phrase.

She is going to be confined to a wheelchair for the next three weeks but she’s not complaining as she will have a nurse at her beck and call.

Hand over a particular duty or responsibility.

A metaphor from athletics: the baton is the short stick or rod passed from one runner to the next in a relay race. Thus, to take up (or pick up) the baton is to accept a duty or responsibility.

Susan has passed the baton after 40 years at the helm of the biggest technology company in the region.

The beaver is proverbial for the industriousness with which it constructs the dams necessary for its aquatic dwellings.

She worked like a beaver to empty the house as the new tenant will be moving in tomorrow.

A problematic or uncomfortable situation.

Originally a board with nails pointing out of it, as used by Eastern fakirs and ascetics.

My parents are very judgemental and living with them can be a bed of nails.

Withdraw, typically to avoid something unpleasant.

Formerly in a military context, a drumbeat could be used to keep soldiers in step while retreating.

David beat a retreat when he saw his ex-girlfriend walk into the wedding party with another man.

A formerly poor person made arrogant or corrupt through achieving wealth and luxury.

The proverbial saying set a beggar on horseback and he’ll ride to the devil.

It’s not surprising that he lost everything and is being investigated by the authorities as he was a beggar on a horseback.

A completely new set of circumstances.

Ball game in North America refers to a game of baseball.

After Sarah joined the Marketing team as General Manager, it was a whole new ball game.

Check out the latest  IELTS Speaking Part 2 topics 2020 with model answers by IELTS......

In part 1 of the speaking test, the examiner will first introduce himself or......

In the IELTS Speaking Part 1 Section, IELTS examiner will introduce him or herself and ask......

"101 IELTS Reading Past Papers With Answers" is a must-have IELTS book for all......