Advanced Grammar for IELTS : Modal verbs (3) : will, would, shall

Modal verbs are the helping verbs that express ideas like ability, permission, necessity, etc. many of the modal verbs have more than one meaning and are followed by the verb’s simple form. These modal verbs are mainly used for academic writing task 2. You must know where to use these modal verbs to score a better band in the IELTS exam.

Diagnostic Test: Modal Verbs (3): Will, Would, Shall

Complete the sentences with the will, ‘ll, won’t, would, wouldn’t or shall and the correct form of the words in brackets.

Circle the correct meaning or interpretation (a or b) for each sentence.

Grammar Explanation: Modal Verbs (3): Will, Would, Shall

Learners of English often think of ‘will’ as a way of expressing the future and of ‘would’ as a word that is used mainly in conditional sentences, but we use both of these modal verbs to express several other meanings. This unit also looks at ‘shall,’ which, although it is the least-used modal in English, we can use to express a variety of meanings.

We will delve deep into will/would, shall/should,

Predictions About the Future

We use will/won’t to make predictions about the future:

Past Predictions About the Future

Sometimes we wish to express a prediction about the future that someone made in the past. For this we often use would/wouldn’t (would is the past form of will):

Certainty About the Present

We make confident ‘predictions’ about the present based on our knowledge or previous experience (or on current expectations) with will/ won’t:

To say that we believe something is certain, we use will/won’t:

To express certainty about something ongoing (i.e. where we would use the present continuous for a fact), we use will/won’t + be + -ing form:

Certainty About the Past

To refer to something which we feel certain has happened (but do not actually know), we use will have + past participle:

This is similar to must have + past participle:

We use won’t have + past participle to refer to something which we feel certain has not happened:

Note: We do not use mustn’t have + past participle in this way, but we can use can’t have:

X We sent the invitations by second-class post. They mustn’t have received them yet.

✓ We sent the invitations by second-class post. They can’t have received them yet.

We often use will/won’t talk about actions that have become so routine that they are predictable:

We can extend this use of will to talk about habits and characteristics:

We can also use the present simple to describe characteristics and habits:

We often use will when talking about the characteristics of capacity or ability:

It is also possible to use can and the present simple for these last two uses with no change in meaning:

We use will (not the present simple) to describe an annoying habit or to make a criticism:

Note: We do not contract well when we use it to describe an annoying habit – we stress it:

X Geoff ’ll leave the lights on when he’s last out of the office.

✓ Geoff will leave the lights on when he’s last out of the office!

We often use will/won’t criticize inanimate objects in this way:

To state a simple fact with no (or little) annoyance, we use the present simple:

We use would/wouldn’t talk about habits in the past:

We can use would/wouldn’t criticize or talk about annoying habits in the past:

Note: We do not usually contract would to when we use it in this way; we stress it:

However, we do not always stress would when it is followed by an adverb:

We can use would/wouldn’t talk about inanimate objects:

We use will to express willingness to do something:

We can use it to express be willing to. In this sense, we can use will/ won’t in the if-clause of a first conditional:

We use won’t/ shan’t to express unwillingness or refusal to do something:

Past Willingness and Refusal

We use would/wouldn’t to show willingness or refusal In the past. We use would in the affirmative only to refer to general willingness (i.e. a habit):

Note: We do not use would in the affirmative to express willingness to do something on a single occasion in the past:

X The tour guide was very helpful. She would contact the Consulate for me when I lost my passport.

✓ The tour guide was very helpful. She contacted I offered to contact the Consulate for me when I lost my passport.

We can use would not for refusal on a single occasion in the past:

We can use both will and shall to make offers. We use will in the affirmative, both to make offers to do something ourselves and on behalf of other people:

We use shall in questions to make more tentative offers than with will in the affirmative:

We use will to make promises:

We can use would, will or won’t when we offer something to another person:

We use shall in questions with us to make suggestions:

To ask for suggestions or advice, we can use shall with a question word:

US English uses should in preference to shall for suggestions:

Note: We use shall in question tags after let’s.

Note: We use would in suggestions or responding to invitations if we want to be more tentative or distant:

We often make requests with a will. These requests are informal and we usually use them only with people we know quite well:

We use would make requests more tentative or polite, or to request things of people we do not know so well:

We can make a request more insistent by using will you as a question tag:

If we request this way, we do not expect the answer to be ‘no’:

We also use shall/ will for rules, for example of examinations and competitions:

We can use would/ wouldn’t show disagreement politely:

We often use would with verbs of liking and preference (like. love, prefer, etc.) to express desires and preferences which we think we can realize:

We can use would with rather to express a preference:

Note: Note that we can use an object with these forms:

Hypothetical Desires About the Present/Future

We use would with be or verbs of liking and wishing to express a desire for the present or future. Fulfilment of the desire is impossible or improbable:

To state a simple fact, we use the present simple:

We can use the present simple (like) to talk about something we currently like and do, but we use would like to talk about an unfulfilled desire:

Wish + would express a desire for another person (not) to do something:

Hypothetical desires about the past

If we want to comment on a hypothetical situation in the past, we use would/ wouldn’t + have + past participle:

Complete these dialogues with a will, won’t, would, wouldn’t, + have if necessary, and a form of the verbs in the box. The first one is given as an example (0).

6. ‘I don’t know. Janice___always____whenever you pointed out errors in her typing.’

7. Quite well, but he____and eat whenever he gets the opportunity!’

8. ‘Phone the printers. They____printing it yet – they don’t print until early morning.’

10. ‘He takes me for granted. He____TV every evening and ignore me completely.’

Rewrite the underlined parts of this phone conversation, using a will, won’t, would and wouldn’t.

JAKE:  Alice, how nice to hear from you!

ALICE: Actually, Jake, I’m phoning to ask you for some advice.

ALICE: Your mother receives help from the Council, doesn’t she? Can you tell me what (1) they agree to do and what (2) they don’t agree to do for older people?

JAKE: Yes, of course. Mum has a home help. She comes three times a week. (3) She’s perfectly happy to do light cleaning and (4) she’s willing to get the shopping, but (5) she refuses to do anything heavy.

JAKE: Well, when she first started (6) she was happy to prepare supper when she came, but she stopped that after a few weeks.

ALICE: Why was that?

JAKE: You know my mum. (7) She insists on saying exactly what she thinks. Apparently, the home help used to make Italian food and Mum didn’t like it. (8) She refused to eat it. Why are you asking, anyway?

ALICE: It’s Dad. He can’t move around very easily now. The neighbours are great, they (9) make a habit of popping in now and again but (10) he’s unwilling to ask them for help if he’s in trouble.

JAKE: Mmm. You can understand that.

ALICE: Oh, but he’s so impatient. I take him to the shops once a week, but yesterday (11) the car refused to start and I was about half an hour late. (12) Was he willing to wait for me? No, (13) he insists on trying to cope by himself! He went to the shops and collapsed on the way there.

JAKE: Oh, dear. It’s a worry, isn’t it? Look, (14) if you don’t mind waiting for a few minutes. I’ll look out the phone number for the right person at social services.

Complete the dialogues below the pictures. Use will, shall or would. 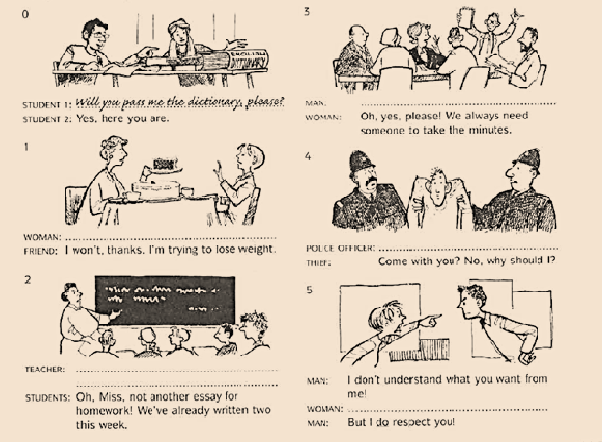 Student 1: Will you pass me the dictionary, please?

Read the article and then decide which word or phrase A, B or C below best fills each space. Circle the letter you choose for each question. The exercise begins with an example (0).

The words that caught the mood of the decade are all there in a book published yesterday – clone, concentration camp, gene, depression – except that was not the 1990s; these words (0)__current in the 1900s.

The Guinness Book of the Twentieth Century cites lists of buzzwords for each decade of the last century. At the outset of the 20th century, few people would have guessed that it (1)___more language change than ever before. Of course, before the days of the communications revolution language evolved much more slowly. Many people today (2)____language not to change at all, but that is an unrealistic dream in the age of the global village.

Words you(3)____every day, such as chatline and trainers, (4)____only thirty years ago. And a word as universal as teenager gained common currency only in the l940s. Words change in meaning too: a scientist in the 1960s (5)____clone to refer only to plants. And anyone who asked ‘(6)____we watch the soap tonight?’ would have encountered total incomprehension before the Second World War. (Soap was what you washed with.)

There is a more worrying side to this if you consider that new coinage reflects the society it comes from. Only twenty years ago few people (7)____stalking, ethnic cleansing or road rage – concepts that the world (8)____perhaps be better without. It (9)____nice to think that the 21st century (10)____us happier words, but don’t hold your breath!

Read the statements from people who have or have had a disadvantaged life. Complete the sentences, expressing the people’s desires and regrets about the past. Use the word in brackets.

There are nine more mistakes in this text connected with the language in this unit. Underline the mistakes and correct them.

Round up: Modal Verbs