The use of the English language must adhere to a set of rules known as grammar. Consequently, it is essential to have a solid understanding of English grammar. You can develop your skills and are sure to conquer the IELTS Exam if you are an IELTS aspirant who is conversant with advanced grammar.

Underline the correct alternative in bold.

Each sentence below contains a mistake. Find the mistakes and correct them.

Relative clauses are subordinate clauses introduced by relative pronouns, such as that, which or who. These clauses give information about someone or something in the main clause. Compare these examples:

The relative pronoun is the subject or object of the relative clause. It is, therefore, unnecessary to repeat the noun from the main clause or introduce a personal pronoun to replace it:

X I used to live in one of those houses that they have now been demolished.

We usually put the relative clause as close as possible to the noun it refers to, otherwise the meaning may not be clear:

X Jack has prepared his favourite dish from Jamie Smith’s recipe book, which he is about to eat

✓ Jack has prepared his favourite dish, which he is about to eat, from Jamie Smith’s recipe book.

A relative pronoun can be the subject of a relative clause:

Here, the pronoun is the subject of the relative clause (the film won the Oscars), even though it is the object of the main clause (I saw the film).

A relative pronoun can also be the object of a relative clause:

Here, the pronoun is the object of the subordinate clause (you made the film).

X Last week I saw the film won all the Oscars.

✓ Last week I saw the film you made at college.

A defining relative clause identifies or classifies a noun or pronoun in the main clause:

(In the second example, the relative clause classifies the members of a group.)

In defining relatives, the relative clause gives information which is necessary for the sense of the sentence. In the first example above, if we say just Is this the book?, this does not convey the key meaning of the whole sentence, i.e. the book that you were looking for.

We often use defining relative clauses to describe an important quality of someone or something:

We often use a relative clause with the same pattern for emphasis, with introductory It:

We usually use non-defining relative clauses to add extra information about the subject of a main clause:

We can also use non-defining relative clauses to show consecutive actions:

We use non-defining relative clauses mainly in writing and formal speech.

The use of commas reflects the way we say the two types of relative clause.

We can use prepositions with relative pronouns. Where we put the preposition depends on formality:

Note: We do not put a preposition before the relative pronoun that:

X This system provides a case in that the contact lenses can be kept.

Note: If we put a preposition before who, the pronoun always becomes whom. Compare:

We can often use were (for places) or when (for times) instead of which + preposition:

We often ‘reduce’ a relative clause, i.e. we shorten it by omitting the pronoun and verb. We can do this with a participle phrase:

Another possibility is to use an infinitive phrase:

This table lists relative pronouns and adverbs and how they can be used:

Notes on the table:

We sometimes use who to refer to animals, particularly domestic pets:

Whom is formal and we rarely use it in speech. We now mainly use it after prepositions:

Note that we always use which (not who) to refer to inanimate objects.

We can also use which to refer to the ‘idea’ of a whole clause:

Here, which refers to the fact that ‘he was unusually attentive’.

We can use that to refer to people or objects, but we usually prefer to use who for a person when the pronoun is the subject of the relative clause:

Note: We do not use that in non-defining relative clauses:

X This offer, that will not be repeated, must end next week.

Note: In US English that is more common than which or who in defining relative clauses.

It is possible, though not very common, to use whose to refer to objects.

We often omit a relative pronoun when it refers to the object of a defining relative clause:

We cannot omit the pronoun if it is the subject of the clause:

X The girl works for the florist in the High Street was at the party.

✓ The girl who works for the florist in the High Street was at the party.

X Last year’s winner presented the cup, each holder keeps for the year.

✓ Last year’s winner presented the cup, which each holder keeps for the year.

We can use which or that + a preposition instead of where:

We can use that as an alternative to when in defining relative clauses:

We can use which or that + a preposition instead of when:

The only noun which takes why as a relative pronoun is reason:

We can use which + for instead of why.

Note: It is possible to use relative adverbs without the noun to which they refer:

We use what to mean ‘the thing that/ which’. The clause containing ‘what’ is a nominal clause, i.e. the whole clause acts as a noun, either a subject or an object. While ‘what’ isn’t used in the same way as ‘that’ or ‘which’ it can fulfill the same functions as the other relative pronouns:

In this example what you told me yesterday is the object of the verb tell. It means the same as:

We cannot use what to replace who, which or that:

X It was the money what I wanted, not the fame.

This could be expressed as:

We often use modifiers, such as all of and many of before which or whom in a non- defining relative clause to refer to the subject or object of the clause:

In defining relative clauses we can modify the pronoun or adverb with -ever to give the meaning of anything, anyone, anywhere, etc.:

Match each headline (1-10) with a sentence (A-J). Then write one sentence containing a relative clause (defining or non-defining) to combine each headline and sentence that accompanies it. Use the present perfect tense in the main clause.

Scientists ___(I) who have been studying cancer genes for years have just discovered a new wonder – cure for cancer. ___

Choose the best sentence to describe each cartoon. 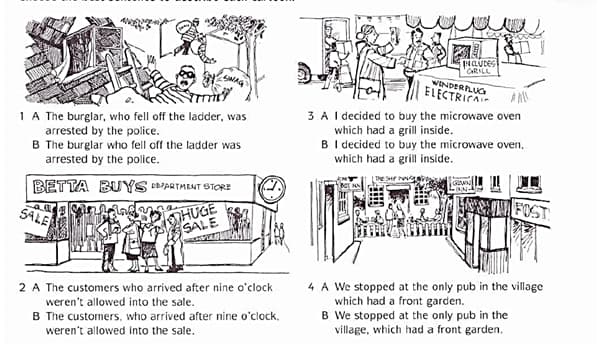 Complete the following article by writing each missing relative pronoun or adverb in the space provided. Use only one word for each space.

Jack of Hearts is a new six-part drama series (0)__which/ that___comes to our screens this week. It has been given the prime Wednesday evening 9.30 slot, (1)___shows that the network has faith in its latest creation. The first episode opens to a scene (2).___a young man is being chased. He stops at a phone box and makes a desperate call. This call wakes up a man (3)___most viewers will recognize as Keith Allen – the slightly sleazy unshaven Cockney (4)___characters are usually less than wholesome. This time, however, he is on the right side of the law, playing a probation officer with a complicated professional and personal life, both of (5)____form the main themes of the series. The writers have managed to find a different angle on his personal problems. At the center of these problems is his stepdaughter, for (6)____he attempts to keep the household together. His relationship with the girl’s mother, (7)____seems to be a bad-tempered, grumpy woman, is further compromised later in the series (8)____she joins the staff of a college at (9)____she meets a former lover. Thus the ground is prepared in this first episode for a series (10)___may help to lift British summertime TV out of its regular slump.

This article has too many relative clauses in it. Change the underlined parts so that you don’t use a relative clause. The first one has been done for you.

Brockenhurst School, which opened as an educational experiment in 1974. is to close this summer. All the teachers (0) who are currently employed by the school will be relocated to other schools in the area (1) which have staff vacancies.

Brockenhurst was founded by (2) Sir Patrick McDonald, who comes from Inverness, at a time when new educational theories were welcomed by the establishment and experiments in education were supported. However, in recent years, such initiatives have been frowned upon as successive governments have urged a ‘back-to-basics’ approach.

The school currently employs 28 teachers, (3) all of whom come from the holistic school of education. Most of the teachers have been at the school for at least 15 years. There are approximately 780 students (4) who are of different ages at the school, and they will all transfer to schools in the region. Staff (5) who are currently living at the school will be found alternative housing by the local council.

Sir Patrick was the first person (6) who was informed of the government’s decision and he passed the bad news on to staff and students at a meeting (7) which was held last week. Sir Patrick, who is 62, has decided to take early retirement. Although Sir Patrick himself was unavailable for comment, a spokesperson for the school told us. ‘We are all very sorry about the closure. For over 25 years we have run an establishment (8) which has been dedicated to making learning a rich and enjoyable experience. All the staff and students (9) who have been participating over the years will agree that this is a sad day not only for the local community but for education in this country as a whole.’

Complete the article at the top of the page opposite with an appropriate relative pronoun or adverb (if necessary) and a phrase from the box. Use each phrase once only. Write the letter of each phrase (A-l) in the spaces (1-8).

There is another world in New York beyond the tourist attractions and the high-rise blocks (0)__which __It’s a world (1)___and pay several thousand dollars for a dress (2)___These are women for whom one of the modern day necessities is having a personal car and driver in New York, (3)___These women, however, are not only interested in designer clothes and facelifts, but they are also serious philanthropists, many of (4)___for charity. Brooke Astor, for example, is a 97-year-old socialite (5)____to charitable causes in the last 40 years. This ‘Queen of New York Society’, (6)____visiting elementary schools and attending charity dinners, has raised $4 million in one evening alone. In an explanation of (7)____she admits that she tries to stimulate competition amongst her wealthy and famous guests. This is a ratified life in (8)____but which does a lot of good for the less fortunate.

Read the following text. In most lines, there is an unnecessary word, a word missing or a punctuation error. For each numbered line 1-22, identify the mistake and write the correct version in the space on the right. Some lines are correct. Indicate these lines with a tick (✓). The first two lines are examples (0 and 00).