While constructing sentences in English, the word orders and verb patterns may differ. Some sentences may have simple verbs, while others may be complicated. To get a good band score, you have to practice a lot and you also should know the various sentences that can be used in English. Only if you practice different verb patterns, you will be able to impress the examiner by using different sentences, simple as well as the difficult in the sentence.

For each sentence below, you are given three possible ways of completing it. Only two are correct. Tick (✓) the correct ones.

2. Passengers stumbled and luggage flew from the racks as the driver suddenly _______

3. The low turnout of towns people at the meeting made the new councellor______

The words in brackets are in the wrong order. Rewrite them in the correct order.

The word order in English is very important in signalling the relationships between the different elements within a sentence. Although the subject usually precedes the verb in English, there are many different ways of ordering the other elements in the sentence. This unit examines word order in sentences, as well as the most common verb patterns in English and the way we link clauses to make complex sentences.

Word order shows us which element of the sentence is the subject and which is the object. In affirmative sentences, the subject is usually first, followed by the verb:

Note: This is not the same as A hot dog really enjoys Sarah (for tea occasionally).

The main part of the example above shows subject-verb-object word order (SVO). There are, however, occasions when we change this word order. In questions, we usually place a verb ( main or auxiliary) before the subject:

We also change the order when we place adverbs such as never, seldom, rarely at the beginning of the sentence for stylistic reasons:

Apart from the variations mentioned, a number of patterns can follow verbs in English. Note that even verbs with similar meanings can take different patterns:

Note: An indirect object is often a person who receives something (a lie, in the example above) and it is often introduced by a preposition.

Some verbs do not have an object. These are intransitive verbs:

We can use adverbs or prepositional phrases with these verbs:

Some common intransitive verbs are: come, fall, go, happen, lie, sleep, swim, wait. Some verbs can be intransitive or transitive:

Note: Sometimes the two uses of a verb can have very different meanings:

Some verbs are followed by complements (not objects). A compliment is usually a noun phrase or an adjective that identifies, describes or gives information about the subject:

George Carey has become the new Archbishop of Canterbury.

After seem, appear, look, feel and sound we can use an adjective to describe the subject:

We can also use a noun phrase to describe the subject after these verbs:

Note: However, when we use a noun phrase after seem or appear to identify (rather than describe) the subject, we have to use to be to introduce the noun phrase:

✓ Surprisingly, the young fresh-faced boy seemed to be the boss

A compliment can also describe the object of a verb. In this case, the object comes before the complement:

We often use verbs of naming, e.g. name, call, elect, with this pattern:

We can use a noun or an adjective as the complement after verbs such as think, keep, consider, prove, call, find:

We can use an adjective as a compliment in the same pattern in a number of idiomatic phrases after verbs such as drive, send and turn:

Transitive verbs have a direct object, which can be a noun or a pronoun:

The object can also be an -ing form (with or without a prepositional phrase):

We can omit the object after some transitive verbs where the context is clear:

X The judges gave to the enormous marrow first prize.

Note: If we put the direct object first, we introduce the indirect object with a preposition (either to or for). We do not vary from this.

✓ The Shakespearean actor brought us a certain amount of class.

We can use a prepositional phrase after intransitive verbs:

We can also use prepositional phrases after transitive verbs:

We do not usually change the order of object + prepositional phrase in this pattern unless the object is very long:

X He carefully removed from the nest the egg.

✓ He carefully removed from the nest the three fragile blue-speckled eggs and the one chick that had already hatched.

Many verbs can be followed by another verb:

We can use a direct object between the verbs:

With some verbs we do not need ‘to’, for example, modal verbs, auxiliary verbs, semi-modals (need and dare), and make and let:

We can use the verb to help with or without ‘to’:

Verbs can be followed by that-clauses or wh– clauses (those which start with a question word). We often use that-clauses after verbs of speaking and thinking:

The staff (subject) agrees (verb)that redundancies were the only course of action (clause).

Note: We can omit that after the verbs mentioned above:

Note: Wh– words can be followed by to + infinitive after verbs such as show, explain, teach:

We can link clauses of equal value (i.e. both can stand on their own) with and, but or or. With these conjunctions we can often put either of the clauses first:

If the subject is the same in both clauses, we can omit it in the second clause:

It is, however, usually possible to change the order of the clauses themselves:

Common types of subordination are:

that or wh– clauses: Didn’t the notice say when the water was going to be cut off?

Relative clauses, introduced by pronouns, e.g. who, which, that: It was surprisingly not their latest CD that went platinum, but the one before.

Comparative clauses: With the strength of the pound at present we paid less for our holiday this year than we did last year.

Choose the correct sentence, A or B, for each cartoon. In some cases both sentences are correct. 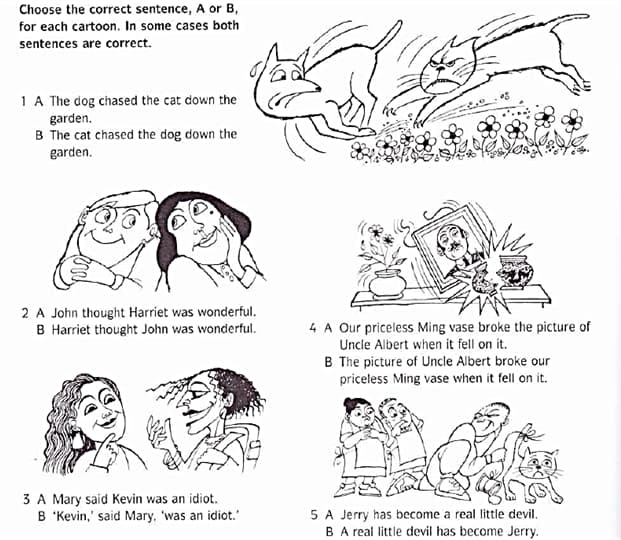 A. The dog chased the cat down the garden.

B. The cat chased the dog down the garden.

A. John thought Harriet was wonderful.

B. Harriet thought John was wonderful.

A. Mary said Kevin was an idiot.

A. Our priceless Ming vase broke the picture of Uncle Albert when it fell on it.

B. The picture of Uncle Albert broke our priceless Ming vase when it fell on it.

A. Jerry has become a real little devil

B. A real little devil has become Jerry

Each sentence below contains one mistake with word order. Rewrite the sentence correctly.

Read the newspaper article and then choose the best phrase (A-P) to complete each space. Write the letter of the chosen phrase in the space. Some of the answers do not fit at all. The exercise begins with an example (0).

Children at Risk from Mental Illness

A recent study has shown that levels of mental illness (0) _G_ The study claims that mental problems such as depression and anxiety (1)___One of the reasons given for this is the current obsessive preoccupation of parents with their children’s safety. Parents today consider the streets (2)___, so children are taken from home to school and back, and their parents rarely let them (3)___.This preoccupation has two causes: fear of traffic accidents and anxiety about child molesters and murderers on the streets. Parents’ fears make (4)____about the outside world and children, in turn, miss the normal adventures of everyday life. In addition, they don’t learn (5)___with other children. Over-anxious children often become (6)___and their fears are therefore realized and even increased. It is a vicious circle. It is a fact, however, that children could be experiencing (7)____While parents may think a child molester lurks (8)___this is not supported by statistics: very few children are attacked by people they don’t know. The fear of traffic accidents is certainly more real but is something that needs to be addressed by society in general. Some cities in The Netherlands, for example, have created (9)____and pedestrian-friendly zones, where cars, if allowed at all, must give priority to people and bicycles. Children can, therefore, play (10)____There are, however, critics of this study. Many child psychologists believe that (11)___enough to cause mental problems. They consider the problems more likely (12)____family breakdown in modern society.

Rewrite the jumbled phrases to make sentences with the correct word order.

Match the clauses in A and B to make sentences, using a linking word from the box to join them. Decide if each sentence contains co-ordinated clauses or a subordinate clause, and write C or S.

Nine of these sentences contain mistakes. Tick (✓) the correct sentences and correct the mistakes.

Fill each gap in this text with no more than three words.

Few things are more detested by drivers than the ‘Denver Boot’ – the wheel clamp. Motorists in many countries consider (1)___one of the most odious inventions ever. Everyone dreads the consequences of finding one of these on their car – phoning the clamping company, waiting (2)____to arrive, paying the fine for removing the clamp, and then, on top of that, paying the original parking fine!

One inventive motorist recently found an ingenious way of releasing his car, however, (3)____cause any damage at all to the clamp or his car. A local shopkeeper takes up the tale: ‘This motorist came back to his car and found a clamp on the wheel. He seemed (4)____.a mild-mannered man, but this had obviously made him really (5)____as he started muttering and swearing under his breath. Then he calmed down. He took out a mobile and phoned the clamping company and they told him (6)_____would be there in 45 minutes, which obviously didn’t please him. Then he had an idea. He took a match and started fiddling with the car tire. I realized that he was (7)____the air escape from the tire. Then he got the jack out of the car boot and jacked up the car – the clamp then slid off the wheel with no problems! (8)____he had carefully placed (9)____on the pavement, he pumped his tire back up, smiled at me, got in the car and drove off. Five minutes later the campers arrived to find no car and an undamaged clamp. I explained to them (10)_____he had done it and they were absolutely furious! It was hilarious!’