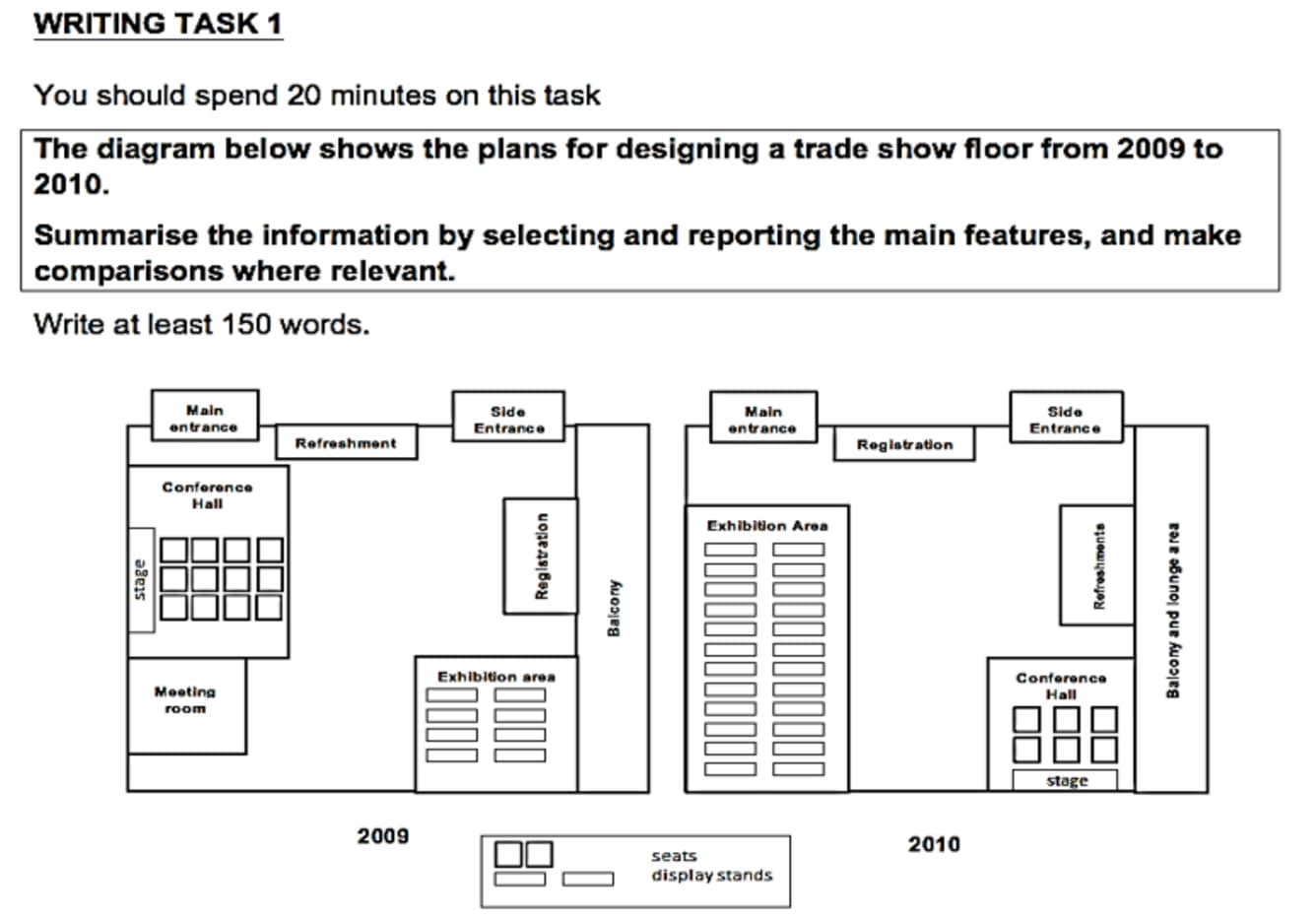 The first map illustrates the layout of a trade show floor in 2009, and the second one shows several changes in its design in 2010.

In general, the configurations of the trade show looked more space-effective after one year. The main difference is the expansion and relocation of several facilities and rooms, while two gate entrances remained intact.

By 2010, the refreshment room had been between the main and side entrances, which experienced no change over the given period. The registration booth had been situated on the right side, attached to the balcony. However, in 2010, the positions of the refreshment and registration areas were swapped. Likewise, the conference hall and the exhibition zone also interchanged their locations, with the former decreasing and the latter increasing in size. Regarding seating in these two areas, the exhibition corner utilized display strands, while visitors can take seats to see the stage when coming to the conference hall.

Another striking feature is the elimination of the meeting room near the bottom left corner, which made room for the expansion of the exhibition area with much more display stands. In addition, a lounge was installed in the balcony, which remained its position on the left-handed side of the floor.

The responsibility for the protection of the environment is by a transnational organization or every country?

Due to its devastating impacts, halting environment degradation has been one of the top priorities around the world. It is widely believed that such responsibility belongs to transnational organizations. While I do agree with the opinion, I suppose that local authorities should also join hands in such an effort.

It is undeniable that national governments hold the power to take concrete actions to protect the environment. The primary reason is that only the local authority of each country can have an insight into its own problems and the authority to devise feasible measures. For example, only government officers know exactly which part of the nation has its environment heavily damaged, thus offer practical schemes to fix the situation. Therefore, governments, but not any other entity, should assume the duty to prevent their own environment from degrading.

However, I am convinced that transnational organizations also play a crucial role in protecting the environment. International institutions could enable multi-national cooperation on a large scale. As a result, more global actions could be taken with the participation of different countries. This could guarantee sustainable and drastic impacts on our surroundings since environmental problems usually across borders and beyond the capability of any single nation to solve. For example, countries along the Mekong River, such as Vietnam, Laos, China, and Cambodia, have reached an agreement to establish a transnational entity named Mekong Committee with certain power to tackle issues related to the shared waters. The organization has successfully stopped plans to build hydropower dams in China or Laos to prevent foreseeable detriments to water conditions in the lower Mekong countries. This case has illustrated the indispensable role of international entities in making vital environmental protection decisions in the context that nations are divided by their interests.

In conclusion, each country’s authorities should bear the duty of keeping their countries from being environmentally degraded. However, it is the transnational organizations that play the deciding role with large-scale impacts.