The line graph below shows the average daily maximum temperatures for Auckland and Christchurch, two cities in New Zealand, and London and Edinburgh, two cities in the United Kingdom. 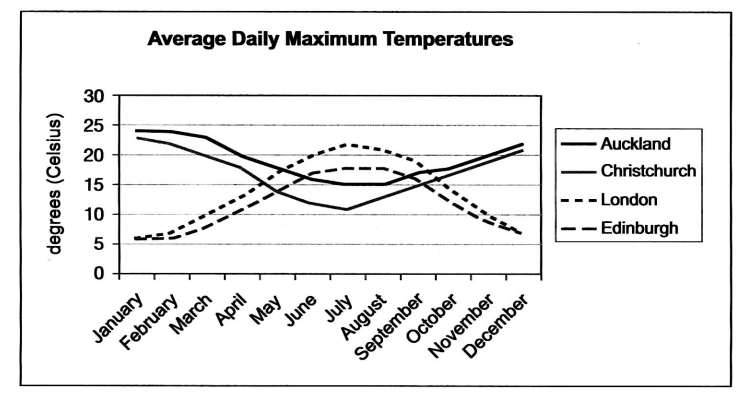 You should spend about 40 minutes on this topic.

Children nowadays watch significantly more television than those in the past, which reduces their activity levels accordingly. Why is this the case?

What measures can you suggest to encourage higher levels of activity among children?

Give reasons for your answer and include any relevant examples from your own experience.

The line graph shows different average daily maximum temperatures throughout the year for Auckland and Christchurch, New Zealand, and London and Edinburgh, the United Kingdom.

Auckland and Christchurch both recorded warmer temperatures during January and February of approximately 24°c and 23°c respectively. The temperatures in both cities then dropped steadily, reaching a low of 15°c in Auckland in July and in August and 11°c in Christchurch in July before beginning to rise back up to just over 20°c in December.

In contrast, the data for London and Edinburgh shows a temperature slightly above 5°c during January, prior to climbing to a peak of about 23°c during July in London and approximately 18°c in Edinburgh during the same month. The temperatures for both cities then dipped to around 7°c and 6°c in December respectively.

Television has become an integral feature of almost every household in the world As a result, children undoubtedly spend more time watching television than previous generations and less time being active.

There are several reasons for this phenomenon and also a number of strategies to encourage children to be more act VC. Firstly, televisions have become much more accessible through price reduction. Also, interesting programmes which target children, such as cartoons, have increased in number and improved in quality, which attracts a greater number of children viewers. Another reason for the increase in television viewing is related to the amount of time young people and children have these days. Often by the time they have studied a full day, they arc simply too tired to go outside and play or do sports.

However, it is still vital that children spend enough time outdoors playing and being active. One approach which could be taken to motivate young children is to take the time to do fun outdoor activities with them, such as ice-skating or going to the beach for a swim. Running children’s outdoor fun groups and camps is another way to encourage young people to be active. As well as these, schools can run physical education classes as part of their curriculum to ensure the rccommended levels of activity are completed each day. Finally, television programmes can build awareness and ideas for physical activities into their shows.

All in all, the reduction in the price of televisions together with high quality of children’s programmes and the time children have have contributed to the problem. However, as discussed above, there arc several initiatives which could help to combat the issue of increased television viewing and decreased physical activities in today’s children.