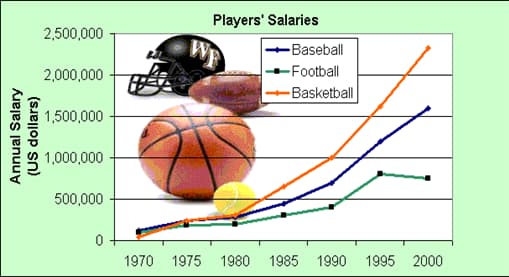 The graph shows the level of sports players’ salaries from 1970 to 2000(annually and measured in dollars).

It is clear from the graph that there was a significant rise in the wages of these sports players over the period shown. However, overall, the players of basketball received the highest salary. In 1970. the wages all the players had were low with about 100. These figures increased slightly to around 250 in 1980 – a rise of 150 in comparison with the original salary. Nonetheless, the wages of basketball and baseball players experienced an exponential increase from roughly 250 to over 2.300 and approximately 1.600 respectively between 1980 and 2000. The period from 1980 to 1990 recorded a slight rise to about 400 for football players before their wages climbed considerably to approximately 800 in 1995. In the next six years, the salaries for football players decreased moderately to around 7000 – about 900 lower than those for baseball players and 1.600 lower than those for players of basketball.

Topic: Some people think international car-free days are an effective way of reducing air pollution, others think there are some other ways. Discuss both views and give your own opinion

A wide range of feasible measures have been proposed in an attempt to enhance the quality of air across the globe. Although it is universally accepted that global car-free days can bean effective solution. It is my conviction that numerous other policies seem to become more possible.

On the one hand, it is undeniable that when almost all citizens on a global scale are willing to resort to other means of transport in order to celebrate a so-called international car-free day, this practice seems to be fruitful. On a day-to-day basis, cars, which are widely regarded as the most prevalent transportation means running on petrol or diesel, discharge a huge quantity of exhaust fumes ranging from carbon dioxides to unburned hydrocarbons. Therefore, there is, in all likelihood, a considerable decline in the amount of pollution-causing gas, meaning that the air quality may become cleaner and healthier. This situation might encourage individuals to reduce car usage in the next days to diminish air contamination.

However. I advocate the viewpoint that several more attainable policies could be introduced with a view to minimizing the number of air quality pollutants. The most immediate solution would be that all factories need to apply cutting-edge pollution-free technologies in production so that exhaust fumes from these factories would become more environmentally friendly. Another remedy may be to construct and put into operation more nuclear power plants as opposed to thermal power stations which release thousands of tons of carbon dioxides into the atmosphere. Other alternative sources of energy namely solar energy and wind power should be exploited. The two latter policies may contribute to fulfilling the increasing requirements for energy for industrial production and daily household consumption without causing serious damage to the air quality.

To conclude, despite the productive global car-free day celebration as aforementioned,  I uphold the standpoint that various other methods seem to be more achievable.