To boost your IELTS Writing score, you should use a range of advanced grammar to impress the IELTS examiner. This lesson will cover Participle Adjectives which is commonly used in IELTS writing task 1, 2 and can help you hike up your score.

We often use -ing and -ed participles as adjectives. We usually use them in the same positions as other adjectives:

Some participle adjectives (see the table below) can be used on their own before or after a noun:

But some participle adjectives (see the table below) can only be used after a noun:
X
✓ Please dispose of your cigarettes in the ashtrays provided

before or after a noun: affected, chosen, identified, infected, remaining, selected, stolen
only after a noun: applying, caused, discussed, found, provided, questioned, taken

We use -ed participles to describe a feeling that someone experiences:
I felt frightened when I watched that film. (= I was frightened / I experienced fear)

Note: Inanimate objects cannot have feelings so we don’t usually use -ed adjectives about feelings to describe them:
X
✓ The report was rather worrying (= The report made readers feel anxious.)

We can use that/those with all participle adjectives with a meaning like “the one/the ones that …”. In this pattern we use that to refer to a thing and those to refer to things or people:

Study the numbered options in italics in this text. Underline the correct options. Note that in some cases both options are correct. 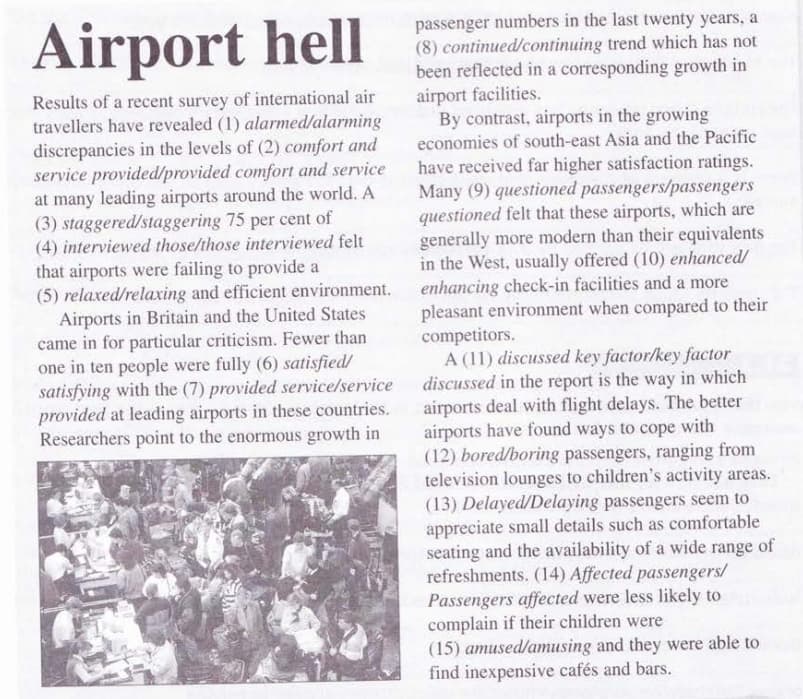 Improve these sentences by rewriting them using compound participle adjectives to replace the underlined phrases. Use suitable forms of one word from each box to form the compound adjectives and make any changes necessary to grammar and word order.