The chart below shows the average daily minimum and maximum levels of two air pollutants in four big cities in 2000.
Summarise the information by selecting and reporting the main features, and make comparisons where relevant. 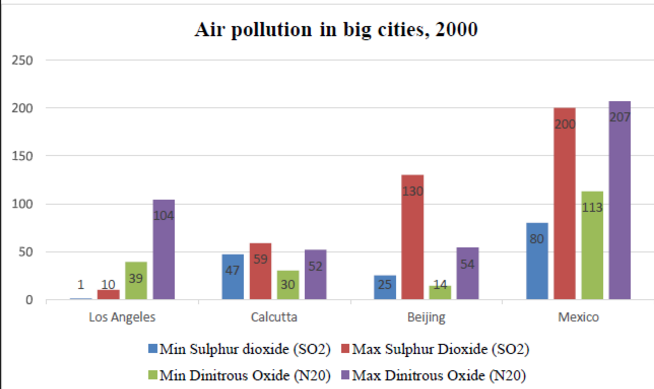 The provided chart represents the average minimum and maximum amount of Sulphur Dioxide and Dmitrous Oxide being disposed daily in various cities in 2000. Overall, Mexico city was the most polluted city with the highest level of both air pollutants.

Some universities offer online courses as an alternative to classes delivered on campus. Do you think this is a positive or negative development?

There has been an increasing tendency of providing online courses in addition to formal ones by universities around the world. Concerning the effects of such a trend, I firmly believe that the availability of computer-based courses should be considered as a completely beneficial movement.

To begin with, it is a fallacy to consider the provisions of internet courses as a negative trend. In fact, some people insist that opting for online courses could lead to the probability of forming generations of students who would lack critical social skills such as inter-personal and teamwork capabilities. However, such a claimed scenario would not happen with the support of advanced online communication platforms. Thanks to the introduction of effective communication tools such as Skype or Facetime, students could easily interact with each other for academic discussions or team assignments, ensuring their chances to enhance essential communication skills. Therefore, it seems obvious to me that presumed negative impacts of visual classes would not be a matter.

On the other hand, I would strongly argue that the provision of online courses as alternatives is beneficial to both students and universities. Firstly, access to Internet-based courses would enable students, especially those who reside in remote regions, to get access to higher education with ultimate flexibility and convenience. Compared to traditional courses which require student attendance and fixed class schedules. Internet-based ones allow students to study at their own pace by granting them full rights to decide their schedules and academic progress. Secondly? with regard to universities, offering online courses could help them reach more students worldwide with reduced investments. Since classes could be conducted online with no geographic restrictions, colleges would be spared from the costs of expanding their schools yet still able to provide courses for more national and international students.

To conclude, the existence of computer-based courses as alternative options to formal classes should be considered as a profitable education progress in the modern world.

Thanks a lot, this is a useful blog for those who want to change their life by preparing and taking high score of IELTS Test,

can u please send pdf version of actual writing tests 2017 task 1and 2 to my email, I reel need that urgently. thanks in advance

Get free counselling from our top Career/Study Abroad experts.