The charts below show changes in the proportion of the energy produced from different resources in a country in 1985 and 2003. 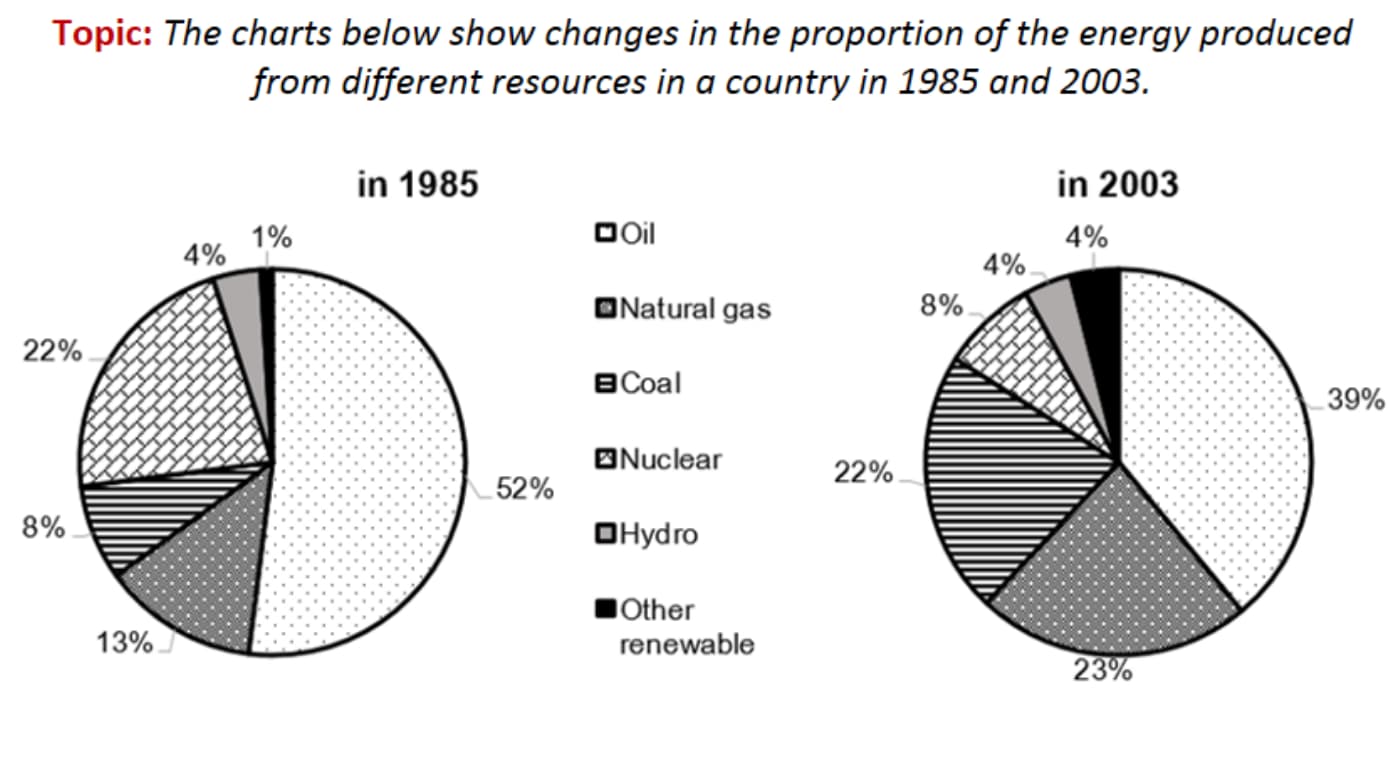 Paragraph 3: Rise in the energy production of natural gas, other renewable sources,  and coal; Give figures

Paragraph 4: decrease in the production of nuclear energy and no change in hydro energy till the end of the period.

The two pie charts illustrate the comparisons of energy generated from various sources, including oil, natural gas, hydro, nuclear, and other renewable sources, in a country between 1985 and 2003.

We can observe from the pie-charts that oil was still the most dominant source of energy production throughout the period despite its usage dramatically dropping from 52% in 1983 to approximately 39% in 2003. However, the country gradually increased energy production from coal, natural gas, and renewable sources.

Over the years, the percentage of natural gas witnessed an increase from 13% to 23%, and coal energy production moderately rose from 8% to 13% in the year 2003. Other renewable resources slightly increased their production from 1% to 4% over 18 years.

Meanwhile, the usage of nuclear energy saw a significant decline from 22% in 1985  to 17% in 2003. Interestingly, Hydro energy accounted for 4% in the initial year and remained stable until the end.

Some people think that the increasing business and cultural contact between countries bring many positive developments. Others say it can cause the loss of national identities. Discuss both views and give your own opinions.

People have different views about the impacts of globalization. Although this development could exert positive influences on national economy, I am of great concern that the preservation of national identities would be deterred.

On the one hand, it is argued by many that cross-border economic and cultural cooperation could be the major drive of national growth. Firstly, increased international trade could create conditions for an economy to grow by leveraging their competitive advantages and boosting their export earnings. The benefit is best shown through robust economic development of net exporters like X country. With the elimination of economic barriers between countries,
X country, a hub of agricultural products, has earned a huge flow of foreign exchange by emerging as the second largest rice exporter worldwide. Improvement in people’s spiritual lives would also accompany. Besides that, borderless cultural contact means that people have chances to get exposed to foreign cultures, whose diversity could enable them to enrich their knowledge and have more choices of entertainment. The popularity of Korean and US – UK music products in Y country could exemplify this point.

On the other hand, I am more of the belief that the uniqueness of individual countries could be under threat as a consequence of growing international cooperation. Multinational corporations could put them in a position to influence local cultural values and promote Western ones in nations having their presence. This is because these Western ideologies could be easily assimilated into local cultures when Western-standard products are marketed and consumers familiarize themselves with new lifestyles these goods create. This might, in the long run, result in a homogeneous set of beliefs and values adopted and the erosion of cultural diversity worldwide.

In conclusion, it is irrefutable that globalization has backed economic and social developments in many countries. However, the danger of losing national identities is also obvious. To avoid such a consequence, I believe that nations need to take actions to preserve their cultural identity through proper education and bolstered social cohesion.