IELTS writing task 1 asks you to take up 2 writing tasks in an hour. It contains the task where you have to write 150 words paragraphs based on the given visuals. In task 1 you need to predict whatever is given. Below is the question is given with the sample answer, which you can use it as a practice test. 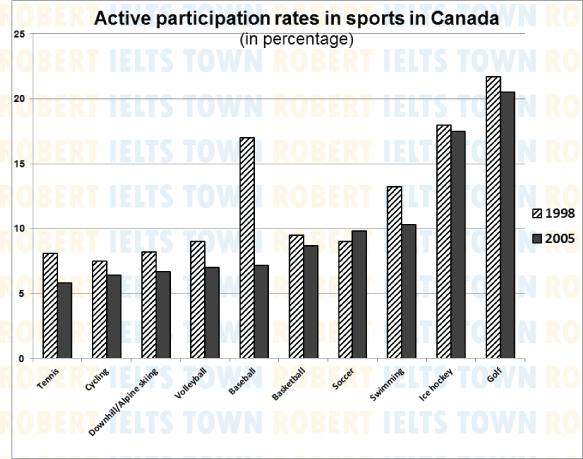 The given bar chart illustrates the percentage of Canadians actively participating in the ten most popular sports in 1998 and 2005. It is obvious that Golf and Ice hockey were the most common sports in Canada, and the participation rates of most sports declined during the period shown.

As can be seen from the graph, in 1998, Golf was the sport that had the highest participation rate with about 22%, followed by Ice hockey with approximately 18%. However, in 2005, these figures fell to just over 20% and about 17.5%, respectively. In 1998, the percentage of Canadians taking part in Baseball was 17%, which is the third biggest, but this rate dropped significantly by some 10% in 2005.

In addition, in 2005, the proportion of people frequently joining in Tennis, Cycling, Downhill/alpine skiing, Volleyball, Basketball was around 8%, and there were slight decreases of 1 to 2 % in the participation rates of these sports in 2005. Similarly, the figure for swimming also went down from 13% to just over 10%. Finally, soccer was the only sport that witnessed a slight increase from about 9% to 10%.

In task 2 of IELTS writing, the examiner will be giving you a topic, and it may be based on anything, you can give your opinion if they ask you to. First, you need to understand the topic given properly and write the essay of about 250 words. Below are the sample topics as well as the sample answers are given, you can use this for writing practice test.

International travel has many advantages for both travelers and the country visited. Do you think the advantages outweigh the disadvantages?

Or: International travel is extremely popular these days. What are the advantages and disadvantages of this trend? Include your opinion and examples from your own experience.

Or: The costs of international travel are decreasing and tourism is growing. What are the advantages and disadvantages of increasing tourism activity in different countries?

Traveling abroad certainly exerts several positive influences on tourists as well as the host country. Although there are still drawbacks of international travel, I think its values are more significant.

On the one hand, the downsides of welcoming foreign visitors are varied. Regarding tourists themselves, travel expenses in famous tourist destinations, Venice for example, are expensive, and there are many complicated and tedious prerequisite procedures such as visa application or plane ticket reservation. As for the countries that play host to international tourists, the rise in costs of living may lay much pressure on local people and be a detriment to domestic travel. This is because the growth in the number of tourists from abroad would encourage the costs of hotel rooms and other services to increase. People in the neighborhood and domestic visitors would suffer in comparison.

On the other hand, I suppose the benefits of international travel would eclipse those analyzed disadvantages. First, travelers can have a number of fascinating experiences of exotic cuisine and culture, and they get to see places they have not seen before. A typical example of this is when tourists from other countries come to Vietnam, they would have the opportunity to use chopsticks, enjoy traditional meals and go sightseeing in the countryside. Second, the increased number of foreign people coming to visit another country would evidently enhance tourism industries, contributing greatly to the wealth of that country. If tourists enjoy their trips, they will recommend the destination to their friends or perhaps they will come back in the future.

In conclusion, it appears to me that the merits of international tourism are more notable than its drawbacks.

As international travel becomes cheaper, more and more people travel and more countries open their doors to increasing numbers of tourists. Some people are of the opinion that international travel does more harm than good whilst others are in favor of the opposite view. From my viewpoint, I prefer the latter opinion for the following reasons.

First and foremost, it is an undeniable fact that international travel goes hand in hand with economic growth since it not only creates millions of jobs but also elevates the tourist industry as well. The most prime example is most countries which have outstanding tourist attractions often has its economic status increased 10% in a few years in comparison with countries which don’t have ones since international travel brings about huge gross profit for travel agencies. Moreover, international travel recruits a huge amount of employees every year and often ensures a high income which results in a decrease in the unemployment rate. In other words, international travel has a great contribution to the economic growth in various aspects. Another reason why I advocate international tourism is that travelers can take advantage of it by acknowledging not only diverse cultures but potential business contracts as well. As a matter of fact, tourists have inevitably witnessed and later obtained general knowledge from history to customs by experiencing cultural cross in their visits. For example, in Japan, thumbing up stands for excellent performance whilst in Indonesia, it doesn’t. Moreover, international travel also aids businessmen to reach their full potentials. For instance, an adequate fishing trade circulation may catch the eye of a French businessman who is looking for one on his vacation in Japan. Therefore, it seems reasonable that travelers benefit a lot from international travel.