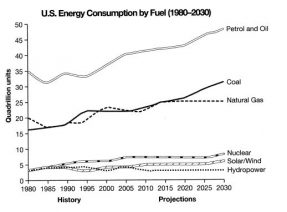 Overview: Mention the main features of the given line graph and give an overview of the information provided.

Paragraph 1: Elaborate on the US Energy Consumption trends.

Paragraph 2: Elaborate on the US Energy Consumption trends.

The graph represents the consumption of different forms of energy by the United States of America from the year 1980 and also the possible levels of consumption till the year 2030.

It is quite evident that energy produced from fossil fuels like coal, natural gas, and petroleum is dominant, whereas alternative energy sources like solar power, wind power, hydropower, and nuclear power are least utilized.

Renewable energy use was significantly less, but consumption had increased overall. The utilization of renewable energy remained constant after 2010, with nuclear and solar/wind power use rising slightly around 2025.