Summarise the information by selecting and reporting the main feature. 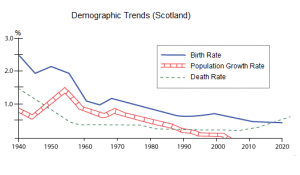 Overview: Mention the main features of the graph and give an overview of the information provided.

Paragraph 1: Elaborate on the demographic trends of Scotland.

Paragraph 2: Elaborate on the demographic trends of Scotland.

The given line graph depicts the trends in the population of Scotland from 1940 to 2020. The parameters shown in this graph are the birth rate, population growth rate, and death rate of Scotland.

The birth rate, population growth rate, and death rate in Scotland have followed a downward trend. However, the mortality rate rose after 2010.

Both the birth rate and the death rate in Scotland were the highest in 1940. The birth rate followed a fluctuating pattern over the years with sharp rises around 1950 and 1970, after which it dropped. The population growth rate also declined overall, apart from a sudden increase between 1950 and 1960 and after which it finally fell to 0% after 2000.

The mortality rate in Scotland dropped from 1.5% in 1940 to somewhere below 0.5% around 1960, after which it remained relatively constant with a few decreases and eventually rose around 2010.