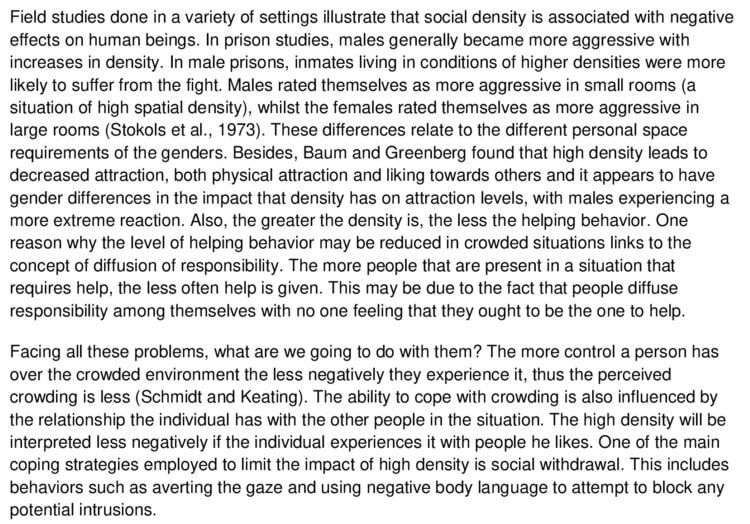 Reading Passage 1 has seven paragraphs, A-GChoose the correct heading for paragraphs A-G from the list of headings below.

Write the correct number, i-x, in boxes 1-7 on your answer sheet.

vii. Definitions of crowding and density

ix. Difference between male and females’ attractiveness in a crowd

Complete the sentences below.

Choose NO MORE THAN THREE WORDS from the passage for each answer.

8 Being disturbed repeatedly, the harried mother feels frustrated for the lack of…………………..

9 Inmates in high-density settings were more aggressive in…………………..

10 The different result between male and female is associated with the varying need of………………….

13 Schmidt and Keating suggest that if more……………………. was present there would be a reduction in crowding stress.

Answer explanation: “…the unprecedented population growth throughout the world – a net increase of 1,400,000 people per week – and all of its associations and consequences; the increasing urbanization of these people, so that more and more of them are rushing into cities and urban areas of the world; and the tremendous explosion of communication and social contact throughout the world, so that every part of the world is now aware of every other part. All of these trends are producing increased crowding and the perception of crowding.” These lines talk about the problems that come into the picture due to overcrowding and hence, the option is Ⅳ.

Answer explanation: “It is important to emphasize at the outset that crowding and density are not necessarily the same. Density is the number of individuals per unit area or unit space. It is a simple physical measurement. Crowding is a product of density, communication, contact, and activity.” These lines explain the definition of crowding and density and the difference between them.

Answer explanation: “A classic crowding study was done by Calhoun (1962), who put rats into a physical environment designed to accommodate 50 rats and provided enough food, water, and nesting materials for the number of rats in the environment. The rat population peaked at 80, providing a look at cramped living conditions.” and “many females stopped building nests and abandoned their infant rats; the pregnancy rate declined; infant and adult mortality rates increased; more aggressive and physical attacks occurred; sexual variation increased, including hypersexuality, inhibited sexuality, homosexuality, and bisexuality.” These lines bring out the nature of Calhoun’s experiment and also its result and inferences.

Answer explanation: “Calhoun’s results have led to other research on the crowding effect on human beings, and these research findings have suggested that high density is not the single cause of negative effects on humans. When crowding is defined only in terms of spatial density (the amount of space per person), the effects of crowding are variable.” These lines indicate the tests that were taken post-Calhoun’s test on mice and their behavior concerning overcrowding.

Answer explanation: “There are several reasons why crowding makes us feel uncomfortable. One reason is related to stimulus overload – there are just too many stimuli competing for our attention. We cannot notice or respond to all of them.” This suggests the reasons why crowding makes us feel enervated and bothered and one of those reasons is the presence of so many factors and stimuli that trigger our brain.

Answer explanation: “In prison studies, males generally became more aggressive with increases in density. In male prisons, inmates living in conditions of higher densities were more likely to suffer from the fight. Males rated themselves as more aggressive in small rooms (a situation of high spatial density), whilst the females rated themselves as more aggressive in large rooms (Stokols et al., 1973).” These lines indicate the effects crowding has on people concerning their social interaction and behavior.

Answer explanation: “The more control a person has over the crowded environment the less negatively they experience it, thus the perceived crowding is less (Schmidt and Keating). The ability to cope with crowding is also influenced by the relationship the individual has with the other people in the situation. The high density will be interpreted less negatively if the individual experiences it with people he likes.” These lines indicate the tips and advice to handle the stress developed due to an overcrowding environment.

Answer explanation: “This feeling is typical of the harried mother, who has several children competing for her attention, while she is on the phone and the doorbell is ringing. This leaves her feeling confused, fatigued, and yearning to withdraw from the situation. There are strong feelings of a lack of privacy – being unable to pay attention to what you want without being repeatedly interrupted or observed by others.” This suggests that a flustered/harried mother is irritated/frustrated because of the lack of privacy.

Answer explanation: “Males rated themselves as more aggressive in small rooms (a situation of high spatial density), whilst the females rated themselves as more aggressive in large rooms (Stokols et al., 1973). These differences relate to the different personal space requirements of the genders.” This suggests that the reaction of males and females to the spatial density and volume of space corresponds to the personal space requirement of both genders.

Answer explanation: “One reason why the level of helping behavior may be reduced in crowded situations links to the concept of diffusion of responsibility. The more people that are present in a situation that requires help, the less often help is given. This may be due to the fact that people diffuse responsibility among themselves with no one feeling that they ought to be the one to help.” These lines suggest that owing to a sense of diffused responsibility, people tend to offer less help to the ones in need.