In boxes 1-6 on your answer sheet write

You should spend about 20 minutes on Questions 14-28, which are based on Reading Passage 2 below.

A. The ‘production line’ system of creating and assembling goods was for many years been the standard mode of operation for many industries. Cars, electronic equipment, packaging – many diverse companies have employed the same methods, and most have hit two main problems, The first is that unscheduled maintenance required on essential machinery has often held up production all along the line, and the second Is the significant impact on employee morale, This has given rise to the increasingly adopted method of Total Productive Maintenance (TPM) – a maintenance program which governs the maintenance of plants and equipment. The goal of the TPM program is to markedly increase production while, at the same time, increasing employee morale and job satisfaction.

B. The concept of TPM was first developed in Japan in the late 1970s, only moving to the western world a decade later, initial success of the programme in countries such as Australia was limited, but in the late 1990s a ‘westernised’ version of TPM was launched. TPM brings maintenance into focus as a necessary and vitally important pan of the business. It is no longer regarded as a non-profit activity. Down time for maintenance is scheduled as a part of the manufacturing day and, in some cases, as an integral part of the manufacturing process. The goal is to keep emergency and unscheduled maintenance to a minimum.

C. TPM involves directing participating companies and industries to move away from traditional methods of production to more efficient mechanisms. This is evident in TPM’s operational focus on lea production rather than mass production. The lean approach favours flexibility within a team, rather than the specialisation of labour Introduced with mass production. It also involves a shift away from being driven by the financial department of the company to a more customer focussed goal. Another goal of the TPM method is to introduce quality control not by being overseen by managers, but rather by engendering a sense if responsibility amongst all staff; a move from autocratic management to empowerment. This shift means that shop floor workers are being able to take a sense of pride in their work, and with that comes the desire to perform well ultimately leading to higher productivity for the company.

D. in order to apply the concepts of TPM, a company will have to work through a number of stages. First, there must be universal agreement that the system has the potential to be successful within the company. Then a specific person or team needs to be appointed to coordinate the changes required to apply TPM methodologies, an aim that begins with training and education for all employees. Once the coordinator is convinced that the work force is sold on the TPM program and that they understand it and its implications, the first action teams are formed. These teams are usually made up of people who have a direct Impact on the problem being addressed. Operators, maintenance personnel, shift supervisors, schedulers, and upper management might all be included on a team. Each person becomes a stakeholder in the process and is encouraged to do his or her best to contribute to the success of the team effort. Usually, the TPM coordinator heads the teams until others become familiar with the process and natural team leaders emerge.

E. The concept of TPM is built on what are referred to as the three pillars – work area management, risk management and equipment management. An illustration of these pillars is highlighted in the importance of recognising and eliminating defects within the machinery used in a company, This refers to issues such as the accumulation of dust and grime on equipment, gauges that are broken or too dirty to read clearly and missing or loose bolts, nuts and screws, Using a sample company, statistics collected from a three month period Indicate a substantial reduction in machine maintenance costs, felling by $ 30,000 between 1996 and 1999. At the same time, the effectiveness of the equipment increased significantly, with machine uptime rising by almost 2096 over the same period.

F. Many observers have identified similarities between TPM and an earlier industry concept – total quality management (TQM), and in many respects, TPM and TQM resemble each other. Both require total commitment to the program by upper level management, and both promote the empowerment of all employees to initiate corrective action, Additionally, both processes require a long range outlook, as it may take a year or more to implement and is an ongoing process, Changes in employee mind-set toward their job responsibilities must take place as well, Indeed, initial results for at least the first quarter may actually lead to reduced productivity while changes are put into effect.

G. The difference between the two systems, however, becomes apparent in when looking at what each system considers to be a priority. TQM is essentially an output focussed system, whereas TPM is singular in that it looks more at input – the equipment used and the causes of real or potential maintenance failures. Also, although both programme stress the need for complete involvement of all parties, TPM stresses the equal importance of all levels of employee, whereas TQM has a more traditional focus on management structure, The main target of both is also slightly different; whereas TQM alms to improve quality, TPM aims to reduce wastage and minimise losses.

Choose the correct heading for paragraphs A-G from the list of headings below.

i. Unique focus of TPM

iv. The introduction of TPM

v. Parallels with a former concept

viii. The guiding principles of TPM

ix. The impact of staff involvement

x. Efficiency through involving all employees

Choose NO MORE THAN TWO WORDS from Reading Passage 2 for each answer.

Label the diagram below using words from the box below. USE EACH CHOICE ONCE ONLY 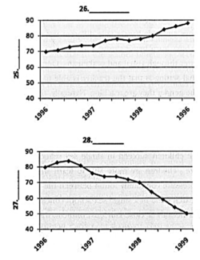 You should spend about 20 minutes on Questions 29 – 40, which are based on Reading Passage 3 below.

A. girls learn faster than boys.

B. teachers need a wider variety of teaching styles than in a co-education setting,

C. some children can thrive due to a more comfortable environment.

D. the opposite sex was not missed

A. allow boys and girls to get a more rounded picture of the opposite sex.

B. may discourage males from studying certain subjects.

C. are falling in popularity.

D. have fewer people involved in extracurricular teams and groups.

A. must be offered the option of co-educational schools for their children.

B. often push boys to succeed in language tasks.

C. have reported that single sex classrooms have helped their child with confidence issues.

D. have been influential in the academic performance of single sex schools.

Complete the notes below USING NO MORE THAN TWO WORDS.

In boxes 37-40 on your answer sheet write

‘Some people believe that old Scottish myths about water creatures such as Kelpies and water horses have contributed to the idea of this wondrous monster lurking beneath,’

‘2007 brought about the most recent sighting of Nessie. A tourist named Cordon Holmes from Yorkshire visited the Loch Ness waters and claimed he not only saw her, but had captured her on video’

‘Despite results that suggest that the fish population was too small, the conclusions drawn were inconclusive’

Disturbances could be mistaken for the Loch Ness Monster.

‘The video footage has been discredited amid accusations of tampering

‘The phenomenon exploded in second half of the century, when photos were publicly released of a ‘flipper’,’

‘Submarines were sent into the Loch Ness to try to discover more about this creature (and now are actually run as tourist attractions).’

‘In 2007, it was estimated that related tourism brought in an estimated £6 million to the region, thanks in part to the attention of the film industry.’

The paragraph refers to the two main problems’ that TPM addresses.

The paragraph talks about when and how TPM was introduced to parts of the world.

The paragraph focuses on the importance not only of managers but of all employees in the application of TPM.

The paragraph refers to the stages of implementing TPM.

The paragraph talks about the three pillars (guiding principles) of TPM.

The paragraph talks about parallels with TQM.

The paragraph looks at what TPM sees as priority (‘unique focus’)

‘First, there must be universal agreement that the system has the potential to be successful within the company’

‘Then a specific person or team needs to be appointed to coordinate the changes to TPM…the coordinator.’

‘Once the coordinator is convinced that the work force is sold on the TPM program and that they understand it and its implications, the first action teams are formed

‘Usually, the TPM coordinator heads the teams until others become familiar with the process and natural team leaders emerge’

‘Some children succeed in single sex schools because of the lack of social pressure -children are more able to ¡earn and grow at their own pace without the pressure commonly found between the genders in coeducational schools,’

‘boys in coeducational settings are less likely to study the arts or advanced academic subjects.,, girls may tend avoid the sciences and technology subjects’

In order for schools to run single-sex classrooms, they must also offer parents the opportunity to enrol their children in a traditional coeducational classroom,’

‘co-education would somehow break down gender stereotypes, but this hasn’t always proved to be the case.’

‘it was first introduced in Switzerland, and swept quickly around most western countries’

‘in single-sex rooms,„ girls are more interested in math and science, subjects generally preferred by boys’

‘Surveys have also shown that a higher percentage of girls in the classroom lower classroom disruption, also creating a better relationship between the students and the teacher’

a significant rise in most western countries of single sex classrooms

the surveys only found that the opposite sex was ‘missed’

the text says ‘a small percentage’, not the majority.