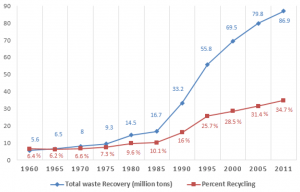 The amount of waste recovered in the United States followed a gradually rising trend from 1960 to 2011. The percentage of waste recycled also increased, but there was a lot of waste left unrecycled.

Initially, the quantity of waste produced was comparatively less, especially from 1960 to 1975, when the total waste recovery was under 10 million tons. The total waste generated started rising and grew drastically after 1985 reaching 86.9 million tons by 2011.