Water use Worldwide and Water Consumption- Line Graph and Table 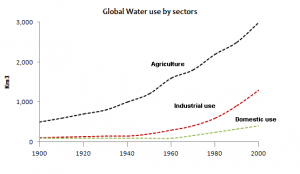 Overview: Mention the main features from the graph and the table.

Paragraph 1: Elaborate on the main features of the line graph.

Paragraph 2: Elaborate on the information given in the table.

The graph and the table portray the utilization of water around the world and consumption of water in two different countries.

The major portion of water consumption in terms of global usage was done by the agriculture sector. Industrial agents were the second largest users of water worldwide, followed by domestic users or the general population. The table shows the contrast in water utilization between a large country like Brazil and a smaller nation like the Democratic

From the table, it can be seen that the water consumption in Brazil is quite larger than that in The Democratic Republic of Congo. This is due to the vast difference in the population and land area of the two countries.