The graph below shows the weekday volume of passenger activity on the Toronto Metro system for July 2007.

You should spend about 20 minutes on this task 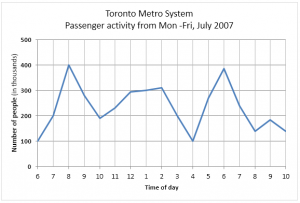 Paragraph 1: Elaborate on the weekday volume of passenger activity on the Toronto Metro system for July 2007.

Paragraph 2: Elaborate on the weekday volume of passenger activity on the Toronto Metro system for July 2007.

The line graph illustrates the number of people that use the Toronto metro system at different times of day for the month of July 2007.

The volume of passenger activity in the Toronto metro system in July 2007 was very erratic. The number of passengers peaked twice a day and the number dropped a few times.