Describe an occasion when you wore your best clothes / formal clothes

I’m going to tell you about the time I was a bridesmaid in my cousin’s wedding last year. It was a spring wedding, so she wanted us to wear light shades of purple with the men in silky, grey suits that were just divine. The exact date was May 13, 2017, held in a town known for its beautiful horse farms and sprawling (open, never-ending) fields called Hunt Valley. My cousin is a devout Christian (serious Christian), so she decided to get married in a Catholic Church with a backdrop of the gorgeous fields behind us.

Although the wedding was held on this day, I ordered my dress three months in advance and had it altered two times before the big day. I had put on  weight during the months leading up, as I was going through a stressful break-up (end of a relationship). So I had to alter my dresses ordered for a size 10 to size 12. Moreover, at the last minute, I realized my heels weren’t tall enough, and the bottom of the dress was dragging along the floor, picking up dirt. So, I had it altered again by about 6cm. When all was said and done, the dress fit me like a glove (fit perfectly). The day before, I went to get a French manicure and had my hair and make-up done the morning. My cousin provided us with bouquets, a flower bracelet, and a set of gold earrings to thank us for being a part of her special day.

Although the dress wouldn’t be my personal taste, I felt that I had to put on a face (smile even when you don’t like something) for my cousin’s sake. I know that a wedding day is one that a person cherishes, for their entire life, so I certainly didn’t want to fuss (complain). Furthermore, a wedding, especially in a church is a formal event, so I wanted to dress accordingly. All in all, I did it for her!

What kinds of clothes do people wear after work?

There are a wide range of clothes people can choose to put on when people go home from their office. One of the most popular types is shorts and T-shirts, which I think is favoured by both sexes. I guess this is because staff are supposed to dress formally at the workplace, and such clothes are pretty uncomfortable. So, casual wear helps the blood circulate better and thereby relaxing their body. Many people are also keen on gym clothes, pyjamas or skirts as it doesn’t increase their laundry, which means they don’t have to wash their clothes frequently.

What kinds of clothes should people wear at work?

I think it depends on what people do. One of the most popular types among manual labourers is thick pieces of garments with protective gear, as these help them prevent injuries and dirt. However, those working in the office have different dress codes for sure. To be more precise, office workers tend to dress formally like a pair of trousers and shirts for males or a dress for females. This is probably because they have to present a professional image in the eyes of the customers, or wearing such clothes gives staff more confidence in their ability.

Do you think it is necessary for children to wear school uniforms?

I strongly believe that it’s vital for school children to wear uniforms. The most convincing reason is that in a developing country, if all students wear the same clothes, which are white shirts and blue pants, then poor students will feel less humiliated and embarrassed about the financial conditions. Eventually, they will be able to focus more on their academic study. It levels the playing field, so to speak. The second reason is that a uniform brings and cultivates a sense of belonging and unity in a group. Besides, it will be pleasing to the eyes, if you see students in their uniforms in the schoolyard line up to enter the class, which I think is unique in my country.

Where do people in your country buy clothes?

There is quite an array of places at which people can purchase their clothes. The most typical example is the supermarket where clothes of all price ranges are on display. I reckon it caters to consumers’ interest as they are able to pick whatever garment they like and try it on, ask their buddies’ opinion, and so on. Another place is at the market or alongside the streets. Clothes sold at these points are often of lower quality but at more reasonable prices, which is quite a popular choice among less well-off folks. Needless to say, but most people are short of cash at times, so this alternative seems to be pretty good.

When do people wear formal clothes?

Formal attire is often a must on essential occasions such as meetings, ceremonies, and other solemn events. Having said this, it’s becoming more and more popular that people nowadays prefer casual wear on nearly all occasions and it’s a standard practice in my country, I’d have to admit. For example, it’s normal to wear jeans and T-shirts to weddings, birthdays, meetings, etc., if the nature of the event is not too severe. It is entirely in contrast to Westerners who often put on a suit or a dress every time they join a formal occasion.

Do people wear formal clothes more often or less often than the past?

It is an interesting question, and my answer is yes. Creative people, who often choose a combination of diverse colors in their clothing style tend to be fashionistas who have a firm grasp of what to wear to make them look best. These people are dynamic, energetic, and love to socialize. On the other hand, those who often wear plain clothes belong to a group that doesn’t have much enthusiasm about fashion and are willing to put on anything they find in their wardrobe.

What are the common question topics asked in IELTS Speaking test Part 1?

The common questions include but not limited to, Work, study, home, clothes, food, hobbies, weather and pets.

Is the Speaking test different for IELTS General and IELTS Academic?

No. It is same for both the modules.

How long will the Speaking test be conducted?

It is usually conducted for a duration of 11 to 14 minutes.

What is the marking criteria for the Speaking test?

How will a typical Speaking test be conducted? 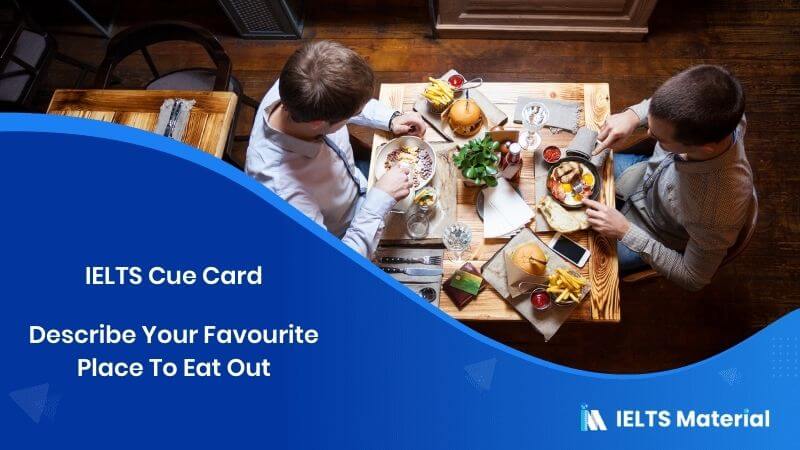 Describe Your Favourite Place To Eat Out – IELTS Cue Card

Describe a picture or photograph in your family: IELTS Cue Card Sample 2

Describe a Lake, A River or A Sea You Like to Visit – IELTS Cue Card

Describe a Museum you have Visited and Liked – IELTS Cue Card

How to Answer IELTS Speaking Part 2?