The charts show the percentage of income spent on food and other goods in 3 European countries from 1998 – 2008. 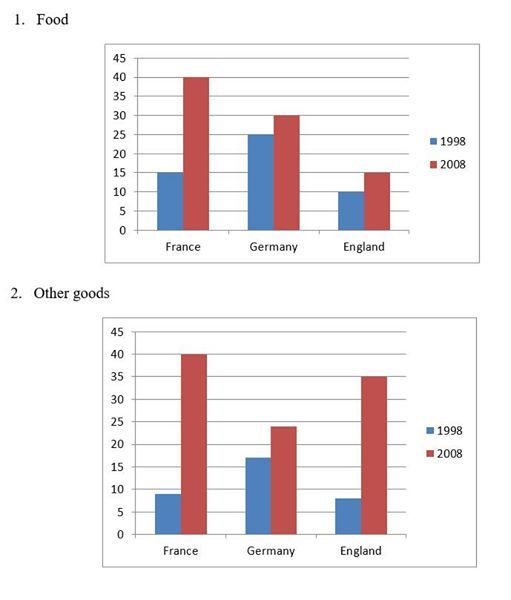 The given bar charts indicate the amount of money that people in 3 countries in Europe, namely France, Germany and England, spent on food and other products in 1998 and 2008.

It can be seen that those three countries saw significant increases in national purchasing power for both nourishment and other types of goods.  In 1998, French citizens allocated 15% and only around 10% of their income to buying foodstuffs and other goods, respectively. After 10 years, those figures dramatically climbed to a similar number of 40%. In Germany, there was a mild difference of 5% between the percentages of income allotted to food commodities in 1998, with 25%, and 2008, with 30%. The numbers for the other category were approximately 5% lower during the same years.

Some people think that developing countries need financial help from international organizations. Others think that it is practical aid and advice that is needed. Discuss both views and give your own opinion

It is widely asserted that the progress of developing nations is dependent on support from worldwide organizations. Nonetheless, it is my strong belief
that practical aid and valuable advice is more useful than monetary support from ther global organizations to ensure their sustainable development.
It is undeniable that various economic issues in underdeveloped countries could be tackled thanks to international financial assistance. In fact, a number of countries are confronted with the declining quality of transportation system as well as educational facilities without a sufficient amount of money to ameliorate the situations. As a consequence, financial donation from overseas could make a contribution to creating direct capital resources for national authorities to upgrade these infrastructures. Equally importantly, developing countries are finding it hard to address their environmental detriment effectively besides facing other domestic socio-economic challenges. Thus, they tend to rely on monetary support from overseas corporations to purchase cutting-edge machines and technologies with a view to combating environmental contamination.

On the other hand. I would contend that practical support and advice may produce long term solutions to develop countries. To guarantee the national stable economic progress, their citizens should be assisted by more realistic support from international community in order to invigorate their nation. To illustrate, global groups may send their elites including excellent economists or scientists to low-income nations to train locals as well as pay the way for them to get exposed to advanced knowledge and innovations in order to create a more productive and in dependent workforce with long-lasting impacts on national development.

In conclusion, although foreign subsidy could play a role in alleviating economic problems of underdeveloped nations. I reaffirm that it is also advisable for them to accumulate authentic experiences from advanced countries.