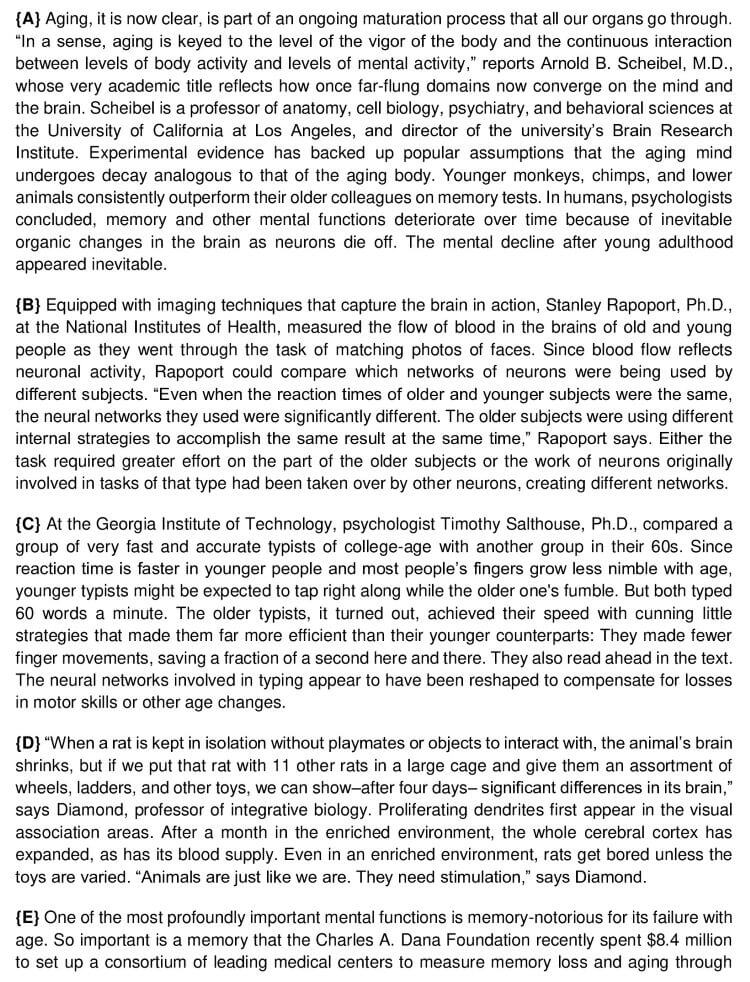 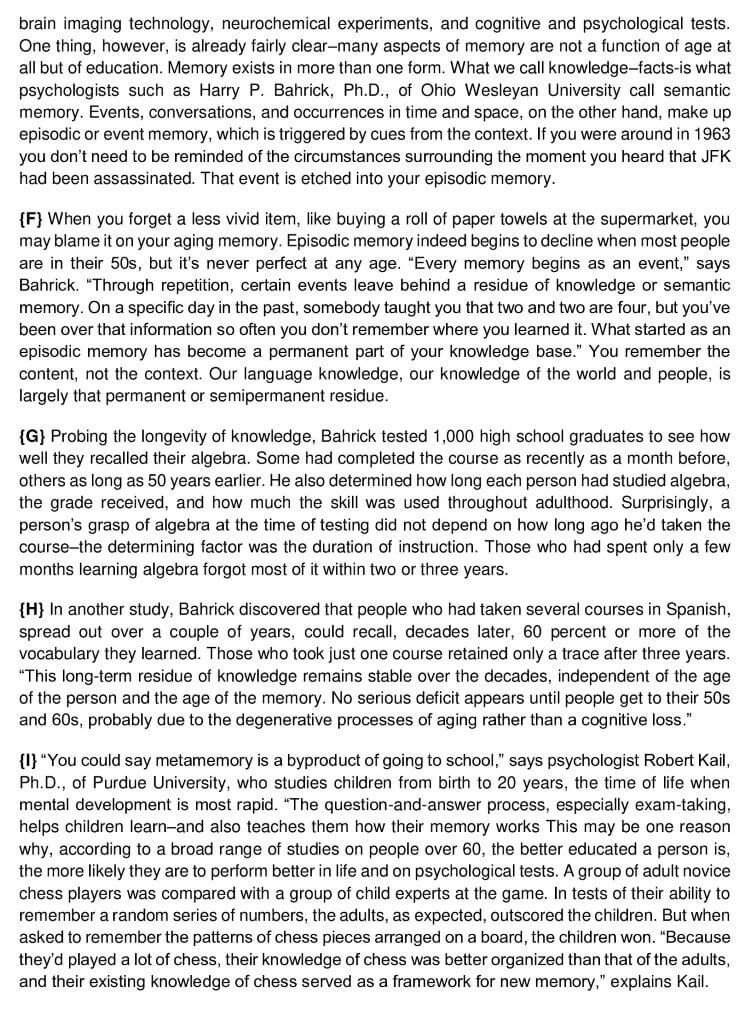 What does the typist’s experiment show in the passage?

B Losses of age are irreversible

Question 15
Which is correct about the rat experiment?

A Different toys have different effects on rats

B Rat’s brain weight increased in both cages.

What can be concluded in the chess game of a children’s group?

A They won games with adults.

B Their organization of chess knowledge is better

C Their image memory is better than adults

D They used a different part of the brain when choosing

What is the author’s purpose of using “vocabulary study” at the end of the passage?

A Certain people are sensitive to vocabulary while others aren’t

B Teachers and professionals won by their experience

C Vocabulary memory as a crystallized intelligence is hard to decline

Use the information in the passage to match the people (listed A-F) with opinions or deeds below. Write the appropriate letters A-F in boxes 24-27 on your answer sheet.

B Arnold B. Scheibel

24 Examined both young and old’s blood circulation of brain while testing,

25 Aging is a significant link between physical and mental activity.

26 Some semantic memories of an event fade away by repetition.

26 Rat’s brain developed when put in a diverse environment.

Answer explanation: “The older typists, it turned out, achieved their speed with cunning little strategies that made them far more efficient than their younger counterparts: They made fewer finger movements, saving a fraction of a second here and there. They also read ahead in the text.” This clearly states that the older people were able to outperform the younger participants by the use of tactful strategies at typing.

Answer explanation: “‘When a rat is kept in isolation without playmates or objects to interact with, the animal’s brain shrinks, but if we put that rat with 11 other rats in a large cage and give them an assortment of wheels, ladders, and other toys, we can show–after four days– significant differences in its brain,” says Diamond, professor of integrative biology.” Thus this suggests that the rat’s brain got affected by the environment around it.

Answer explanation: “A group of adult novice chess players was compared with a group of child experts at the game. In tests of their ability to remember a random series of numbers, the adults, as expected, outscored the children. But when asked to remember the patterns of chess pieces arranged on a board, the children won. “Because they’d played a lot of chess, their knowledge of chess was better organized than that of the adults, and their existing knowledge of chess served as a framework for new memory,” explains Kail.” This suggests that owing to the better-organized knowledge of chess, the kids outperformed the adults.

Answer explanation: “Crystallized intelligence about one’s occupation apparently does not decline at all until at least age 75, and if there is no disease or dementia, may remain even longer.” and “Vocabulary is one such specialized form of accrued knowledge. Research clearly shows that vocabulary improves with time. Retired professionals, especially teachers and journalists, consistently score higher on tests of vocabulary and general information than college students, who are supposed to be in their mental prime.” This suggests that the vocabulary study implied that crystallized intelligence is hard to decline with age.

Answer explanation: “In humans, psychologists concluded, memory and other mental functions deteriorate over time because of inevitable organic changes in the brain as neurons die off. The mental decline after young adulthood appeared inevitable.” This suggests that the memory loses its efficiency with aging and maturation.

Answer explanation: “Memory exists in more than one form. What we call knowledge–facts-is what psychologists such as Harry P. Bahrick, Ph.D. of Ohio Wesleyan University call semantic memory.” This suggests that the memory which is derived from the facts and knowledge is called Semantic memory.

Answer explanation: “Events, conversations, and occurrences in time and space, on the other hand, make up episodic or event memory, which is triggered by cues from the context.” Therefore, the memory that is derived from a single event/episode is called episodic memory.

Answer explanation: “Probing the longevity of knowledge, Bahrick tested 1,000 high school graduates to see how well they recalled their algebra. Some had completed the course as recently as a month before, others as long as 50 years earlier.” This suggests that the study about retention and memory was carried out on 1000 subjects on the knowledge of Algebra.

Answer explanation: “In another study, Bahrick discovered that people who had taken several courses in Spanish, spread out over a couple of years, could recall, decades later, 60 percent or more of the vocabulary they learned.” This suggests that the study, in which the memory and retention power was tested, discovered that the people who repeatedly revised the subject retained more than half of the vocabulary learned in the Spanish language.

Answer explanation: “Equipped with imaging techniques that capture the brain in action, Stanley Rapoport, Ph.D., at the National Institutes of Health, measured the flow of blood in the brains of old and young people as they went through the task of matching photos of faces.” Hence this clearly states that the relation between the blood circulation in the brain and the tasks performed by the subjects was studied by Stanley Rapoport.

Answer explanation: “Aging, it is now clear, is part of an ongoing maturation process that all our organs go through. “In a sense, aging is keyed to the level of the vigor of the body and the continuous interaction between levels of body activity and levels of mental activity,” reports Arnold B. Scheibel, M.D., whose very academic title reflects how once far-flung domains now converge on the mind and the brain.” Hence the connecting link between physical changes and metal retrogression in relation to aging was reported by Arnold B. Scheibel.

Answer explanation: “Every memory begins as an event,” says Bahrick. “Through repetition, certain events leave behind a residue of knowledge or semantic memory.” Hence the statement regarding the episodic memory changing into semantic memory on several repetitions was made by Harry P. Bahrick

Answer explanation: “‘When a rat is kept in isolation without playmates or objects to interact with, the animal’s brain shrinks, but if we put that rat with 11 other rats in a large cage and give them an assortment of wheels, ladders, and other toys, we can show–after four days– significant differences in its brain,” says Diamond, professor of integrative biology.” This clearly states that Professor Diamond made the statement regarding the rat’s brain and the diverse environmental effects on its brain. 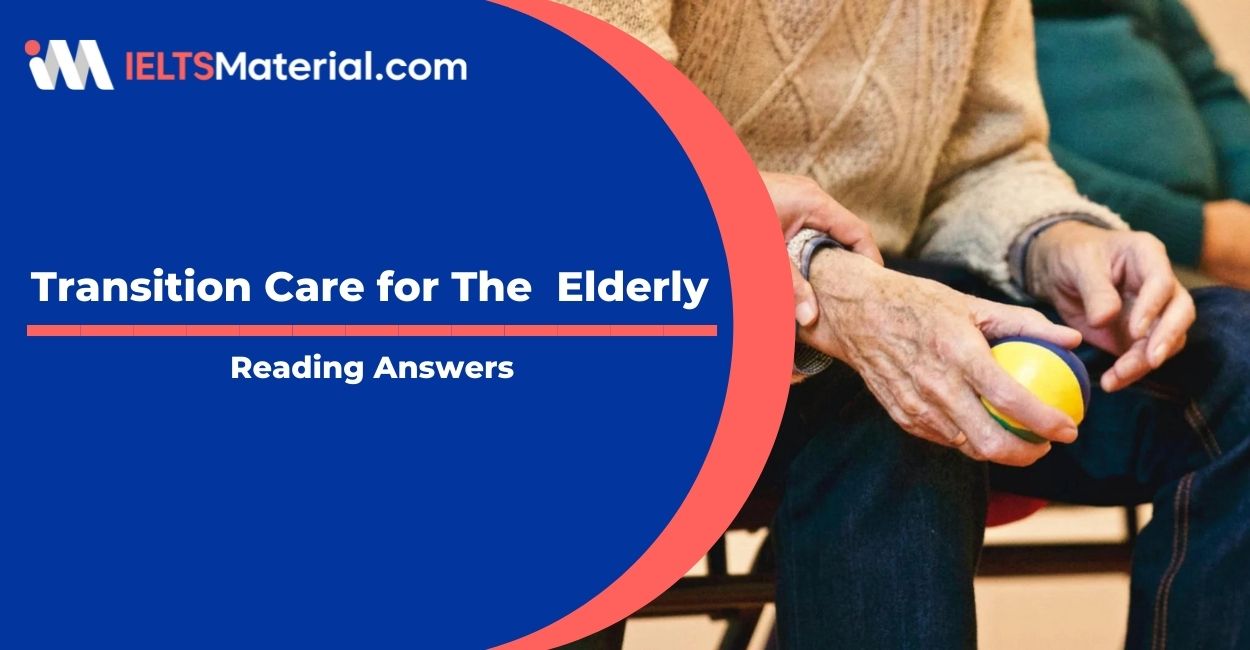