Describe Image is one of the most complicated tasks in the IELTS Writing module. Without a sound plan, it can be difficult to perform well on the Describe Image exercise. The Bar Graph is the ideal format for practising the Describe Image problem because it has logically and simply organised all of the components. Elements of the Bar Graph include the layout, the figures, the contrasts, and the similarities.

The charts below give information about USA marriage and divorce rates between 1970 and 2000 and the marital status of adult Americans in two of the years. 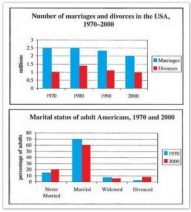 Overview: Mention the main features of the bar graphs and give an overview of the information provided.

Paragraph 1: Elaborate on the pattern of marriages and divorces in the USA between 1970 and 2000.

Paragraph 2: Elaborate on the marital status of adult Americans in 1970 and 2000.

The first bar graph represents the number of marriages and divorces in the USA from 1970 to 2000. The second bar graph shows the marital status of adult Americans in 1970 and 2000.

The number of marriages was higher than the number of divorces every year from 1970 to 2000. Most adult Americans were either married or never had been married in both 1970 and 2000.