The Academic passage ‘Collecting Ant Specimens’ is a reading passage that appeared in an IELTS Test. Read the passage below and answer questions 27-40. Beyond the questions, you will find the answers along with the location of the answers in the passage and the keywords that help you find out the answers.

TRUE if the statement agrees with the information

FALSE if the statement contradicts the information

NOT GIVEN if there is no information given on this

27) Taxonomic research involves comparing members of one group of ants.

28) New species of ant are frequently identified by taxonomists.

29) Range is the key criterion for ecological collections.

30) A single collection of ants can be used for both taxonomic and ecological purposes.

Classify the following statements as referring to

31) It is preferable to take specimens from groups of ants.

32) It is particularly effective for wet habitats.

33) It is a good method for species which are hard to find.

34) Little time and effort is required.

36) Non-alcoholic preservative should be used.

Label the diagram below. 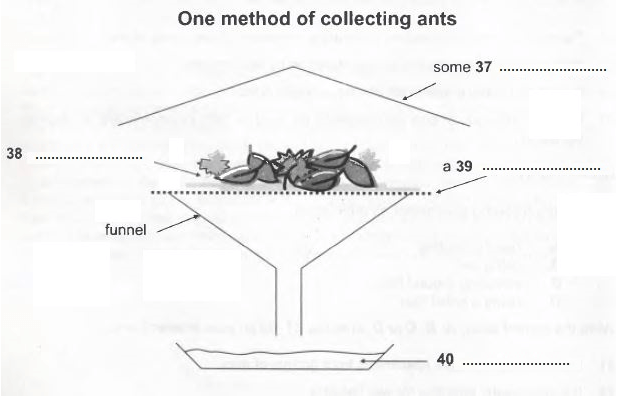