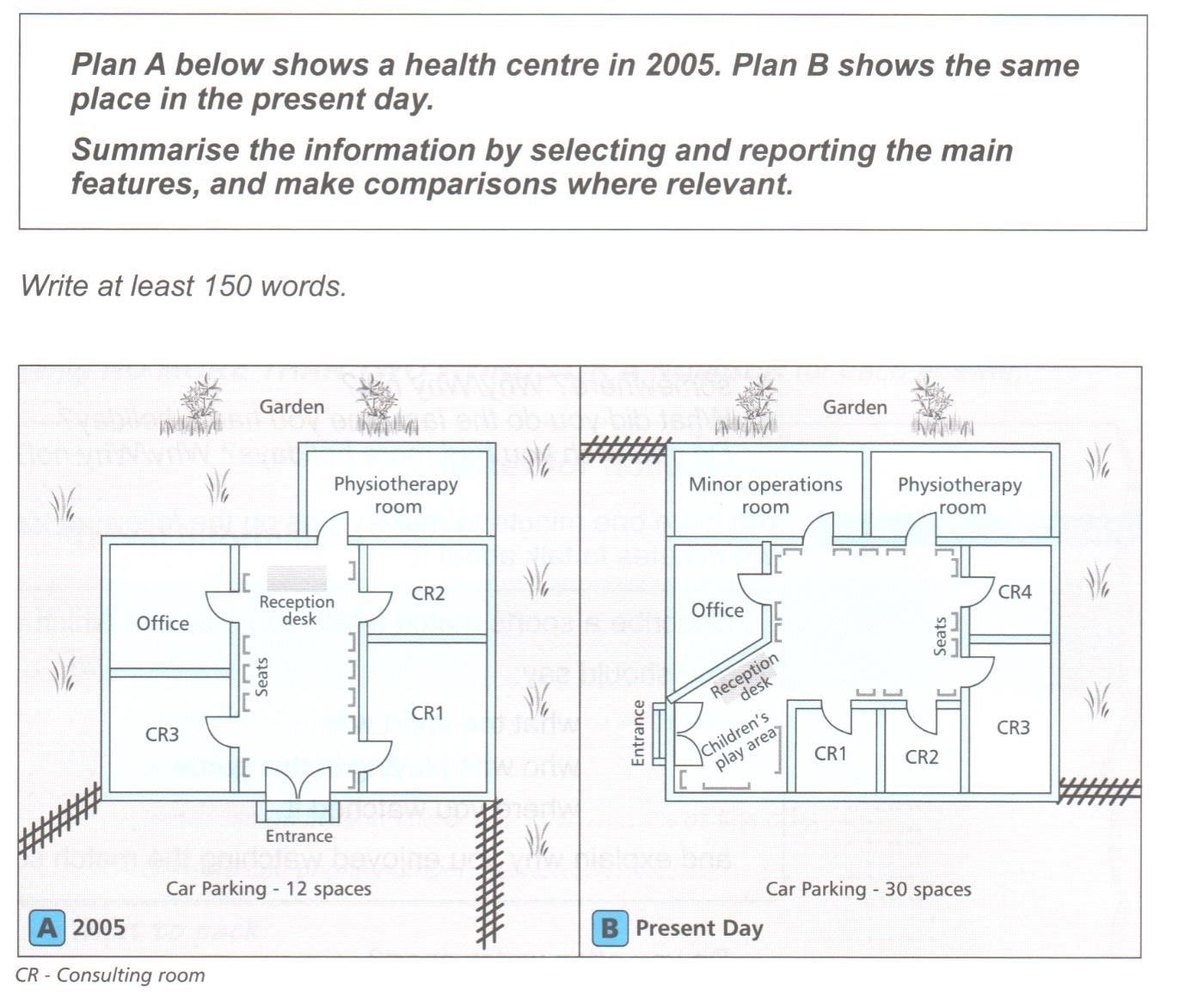 The maps illustrate the changes that have taken place in a health care centre since 2005.

Overall, the main building has been expanded and restructured. While the garden has been reduced in size, the car park has been enlarged to serve more patients.

The entrance has also been moved to the southwest of the building, next to the new location of the reception desk and close to a new children’s play area. Whereas the office has been reduced in size, the main hall has been broadened and more seats have been added around the hall. The physiotherapy room has remained unchanged since 2005.

The car parking area has been expanded to make room for 18 new parking slots. By contrast, the size of the garden has been cut down by half. The fences have been relocated in accordance with the new areas for the car park and the garden.

Discuss both views and give your opinion.

The methods of mitigating traffic congestion have been a heated topic of controversy. Some people argue that the construction of larger roads is the answer to the problem. However, I contend that such a solution is ineffective in the long term while constructing railways and subways is a far better measure.

There is a common fallacy that governmental spending on building larger roads could sustainably address traffic congestion. An increase in road size could reduce the traffic intensity in the short term, but larger roads also mean that the citizens are encouraged to purchase more individual vehicles. This leads to the fact that the roads, albeit larger, would soon be filled with heavy traffic again. For instance, traffic jams returned to Shanghai’s main streets not long after they were expanded in the early 1990s. In brief, if this solution were implemented, traffic jams would persist in the long run.

Rail and subway systems, however, could ensure that traffic congestion is properly addressed. Unlike cars and buses, trains can transport hundreds of people simultaneously and thus would meet the transport demand of a vast number of passengers. Moreover, trains do not have to go through intersections and traffic lights, and dedicated lines ensure their travel is hardly interrupted. In other words, trains are always on time regardless of the level of traffic. This level of punctuality would encourage many people to choose railways and subways as their primary means of transport, and the number of individual vehicles would decrease accordingly. As a result, traffic congestion could be tackled successfully.

The existing data provides a concrete foundation to conclude that building more and larger roads is an unsustainable measure, while train and subway lines would be a much more practical solution for the problem of traffic congestion.