The bar chart shows the number of visitors to three London Museums between 2007 and 2012. Summarize the information by selecting and reporting the main features, and make comparisons where relevant. 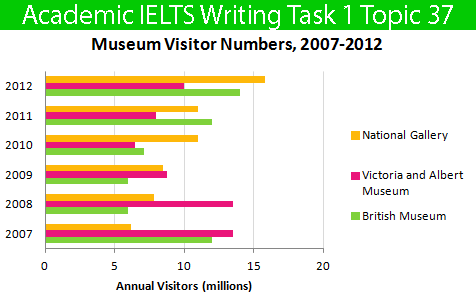 The bar chart illustrates information about how many people per year visited three London museums over a six-year period from 2007 to 2012.

Overall, what stands out from the graph is that there was a gradual upward trend in the number of visitors to the National Gallery, which became the most popular museum from being at last place. In contrast, the Victoria and Albert Museum followed the opposite trend. In the first two years of the period, the number of visitors to Victoria and Albert Museum remained stable at 13.5 million. It then fell to 9 million in 2010. On the other hand, the British Museum’s footfall dropped significantly by 50%, from 12 million to 6 million and remained at this level in 2009.

However, there was a gradual increase in the footfall of both the British Museum and Victoria and Albert from 2010 to 2012. The former number doubled, and the latter rose by more than 50%, finishing at 14.5 and 40 million respectively. Moreover, there was a significant increase in the number of visitors to the National Gallery over the whole six-year period, the figure finishing at almost 16 million.

The provided bar graph compares the London museum visitors in three different types on museums from 2007 to 2012. As is presented in the graph, the National Gallery got popularity over time and the highest number of people visited those museums in 2007 and in 2012.

According to the graph, initially in 2007 more than 12 millions people visited British museum while this number was more than 13 millions for Victoria & Albert museum and only 6.5 millions for National Gallery. The popularity of Victoria and Albert museum remain same in the next year while this decreased for the other two museums. The National Gallery museum visitors’ numbers remained increasing each year while the total number of museum visitors decreased in 2009, 2010 and in 2011. Finally in 2012, the National Gallery got the highest number of visitors amounting more than 15 millions while the number for British museum reached to about 13 millions and for Victoria and Albert Museum got 10 million visitors.
In summary, National Gallery gained in popularity over time and more people visited the London museums in 2007 and in 2012 than they did in the years in between these two.

The bar chart shows the number of visitors to three London Museums between 2007 and 2012. Summarize the information by selecting and reporting the main features, and make comparisons where relevant. Write at least 150 words

This bar chart represents the number of annual visitors on three different museums named National Gallery, Victoria and Albert museum and British Museum between 2007 and 2012. Overall, in 2012, significantly greatest number of people visited to National Gallery. Also least number of visitors was to British museum in 2009. In early years 2007 and 2008, Most people visited to Victoria and Albert Museum with the same number in quantity over 13 million. Then this amount suddenly reduced to about half numbers of visitors in 2010. However, visitors to Victoria and Albert museum gradually rose from 2010 to 2012. Although the visitors to the National Gallery were very low numbers in 2007, It Progressively increased between 2007 and 2012. But, this quantity was equal in 2011 and 2010. Moreover, in 2007 people visiting to British Museum was nearly high number with about 12 million. However, this quantity rapidly dropped to half in 2008 with 6 million. Then, number of annual visitors considerably went up between 2008 and 2012.

The graph bar shows the amount spent on consumer goods during 2007 by five countries: Belgium, Spain, Austria and Britain. Overall, Britain scored the highest spending in all kinds of good amongst the other countries, whereas Belgium and Austria had the lowest spending. Britain got the highest spending in all goods compared to the other countries, and cameras had the highest money spending in Britain in which it was 170 thousand pounds. Similarly, Spain spent higher than Austria and Belgium in console games, outdoor game accessories, and cosmetics, whereas had the same spending with Austria in toys in which they spent around 158 thousand pounds. Austria and Belgium spent lesser than the other two countries in most of the goods. By comparison, Belgium spent higher in console games, outdoor game accessories and cosmetics. However, Austria spent higher than Belgium and Spain in books with around 156 thousand pounds and in cameras with around 166 thousand pounds per year.