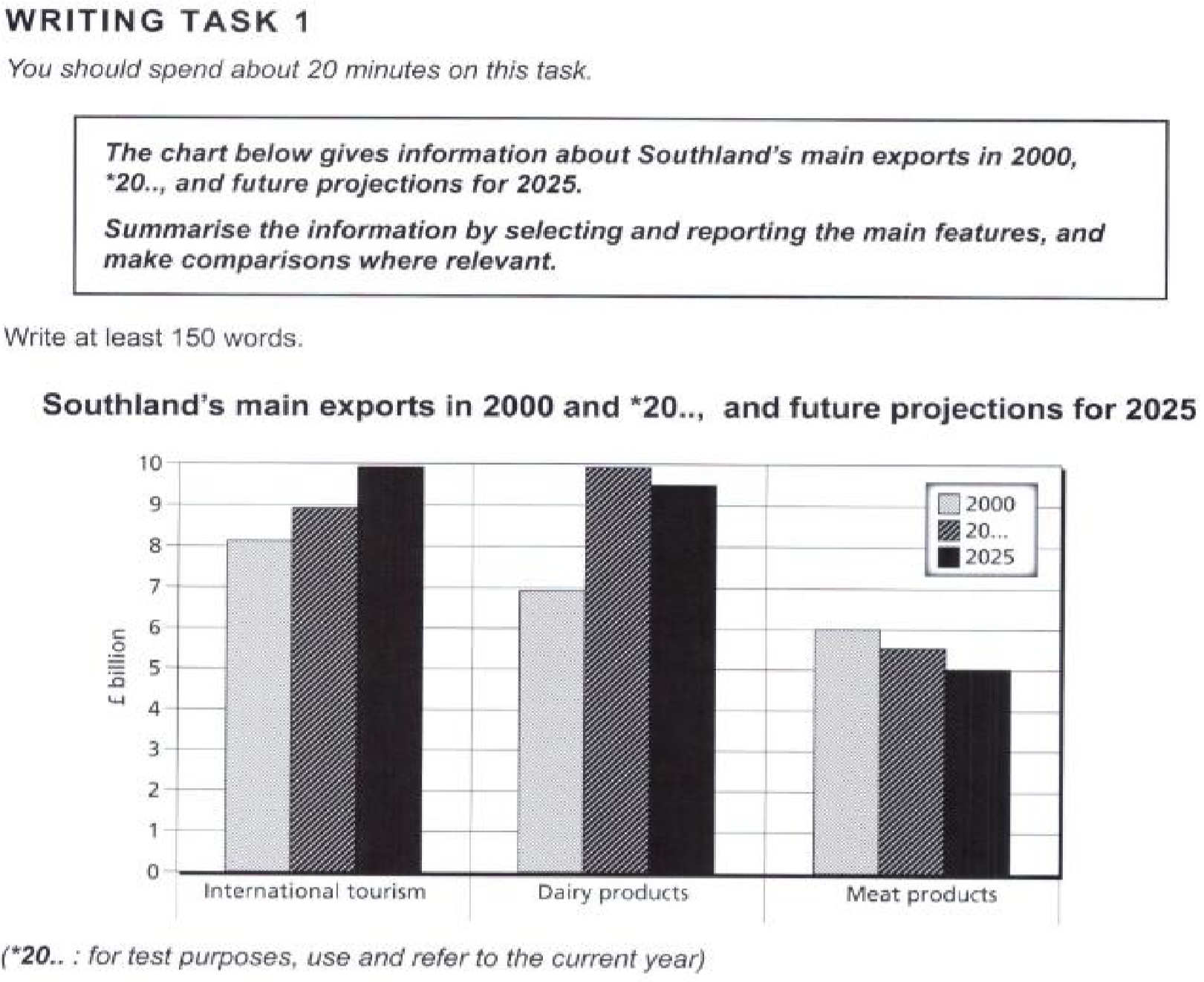 The bar chart illustrates the data on major exports in Southland in 2000, 2016 and the estimated figures in 2025.

Overall, while international tourism and dairy exports have generated more revenue since 2000, sales for meat products have experienced a downward trend. It is forecasted that by 2025, only the value of international tourism will continue to grow, whereas that of dairy and meat export industries will decline.

In some countries, old people are highly valued and in other countries, the young are considered to be more valuable. Discuss both views and give your opinion.

Or Some cultures value old age while others value young age. Discuss both views and give your opinion.

People have different views about whether the elderly or the young are more valued. This essay will discuss both points of view

Aged people have more experience behind them. They have seen more life. As a result they have a deeper understanding of the problems of the world and are more capable of making judicious decisions. In Australian culture, aged men and women command great respect in the society. Theirs tend to be the last word in matters of utmost importance. Young men and women in the family may have better educational qualifications, but they still listen to their aged parents and grandparents.

Consider the case of world leaders. Most of them are men and women in their sixties or seventies. They are chosen leaders for their ability to handle situations with more maturity. All over the world, people who occupy higher positions aren’t exactly young. Youngsters may be full of energy and enthusiasm, but they lack experience and the maturity that comes with it. They are also more likely to get carried away by their emotions or excitement.

On the flip side, old age is a period of increasing dependence. As people age, their faculties may get impaired. They may have trouble remembering things or making sound decisions. Unfortunately, this is an inevitable part of the process of ageing. People also become much less productive in their twilight years.

After analyzing the situation, it is felt that both ages have their merits and demerits. Age may bring wisdom, but it also makes people dependent. The truth is that no society can survive without the energy and enthusiasm of its youngsters. And if they receive the guidance of their aged counterparts, they will be able to work wonders.

    Good range of vocabulary
    Logical ideas
    Quite good control of grammar, with several blunders
    The introduction and the conclusion are not very well-written. Bear in mind that there should be a background statement and a thesis statement in the introduction.
    Some problems with the usage of conjunctions (on the other hand, last but not least, etc.)
From my perspective, your essay is around band 7.0. You should work on your introduction and cohesion & coherence