The table shows the percentage of journeys made by different forms of transport in four countries, The bar graph shows the results of a survey into car use. 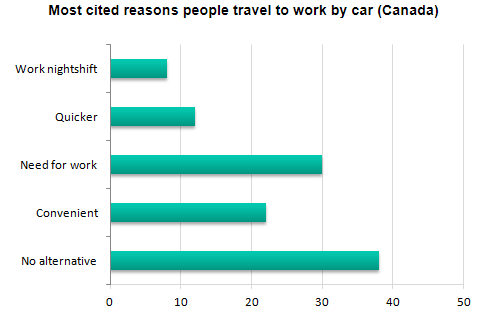 The table compares modes of transport used in four countries: Canada, Belgium, Germany, and the Netherlands. The percentage of journeys made by car, bicycle, public transport and on foot are given. The bar chart shows the results of a survey of the reasons people in Canada travel to work by car.

As can be seen from the table, cars were the most frequently used form of transport in all four countries. However, the proportion of journeys made by cars ranged from a low of 47 percent in the Netherlands to a high of 90 percent in the Canada. Figures for the other forms of transport also varied considerably. Not surprisingly, in the Netherlands, a high proportion of trips were made by bicycle (26%) and on foot (18%). The highest rate of public transport use was in Germany, where nearly one in five journeys was made by public transport.

The bar chart provides information that may help explain the high car use in Canada. The most frequently cited reason was the lack of any other alternative (38%). Although a sizeable percentage said it was more convenient (22%), the other factors listed appeared to relate more to need than preference, e.g., working night shift.

Overall, the figures show considerable variation in modes of transport used, though the car continues to dominate in most contexts.

No Bar chart given.

Hi, Thanks for keeping us informed about this. I just added Bar Chart in this post. Please re-check. Thank you so much