The IELTS Reading Module takes around 60 minutes to complete. For this section, you will have to attempt a series of different question types based on a short to medium length passage. The best way to prepare for this is by attempting as many sample questions of this type – to hone your speed and accuracy. To begin with, take a look at the passage below:

History of Fire Fighting and Prevention 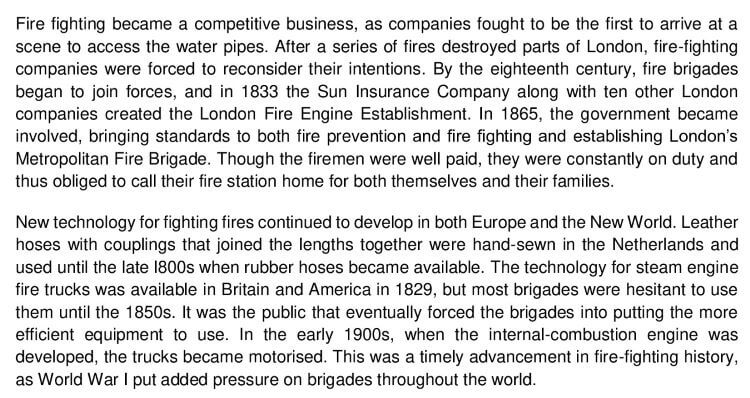 Complete the chart below.

Use NO MORE THAN THREE WORDS from the text for each answer.

Choose the correct letters, A—C, and write them on lines 21—23 on your answer sheet.

A carried water to the site of the fire.

A London was destroyed by a series of fires.

23 Firemen who worked for the Metropolitan Fire Brigade

B lived at the fire station.

C were not allowed to marry.

Do the following statements agree with the information in the reading passage?

YES: if the statement agrees with the information

NO: if the statement contradicts the information

NOT GIVEN: if there is no information on this in the passage

24 Leather hoses for fire fighting were made by machine.

25 Steam engine fire trucks were used until the early 1900s.

26 Fires caused a great deal of damage in London during World War I.

Answer explanation: “Watchmen also learned to create firebreaks with long hooked poles and ropes in order to pull down structures that provided fuel for a fire.” This suggests that the poles and ropes were pulled down to cut off the fuel from the fire.

Answer explanation: “In 1066, in order to reduce the risk of fire in thatched-roof houses, King William the Conqueror made a ruling: Citizens had to extinguish their cooking fires at night.” This suggests that the fire was put out in order to prevent the thatched roof from catching the fire.

Answer explanation: “The event that had the largest influence in the history of fire fighting was the Great Fire of London in 1666. The devastating blaze originated at the King’s Bakery near the London Bridge. At the onset, Lord Mayor Bludworth showed little concern for the fire, assuming it would extinguish itself before he could organize a group of men to attend to it. However, the summer of 1666 had been uncharacteristically hot and dry, and the wooden houses nearby caught fire quickly.” This suggests that in the hot and dry weather in 1666, the Great Fire of London took place.

Answer explanation: “Although the procedure of pulling down buildings to prevent a fire from spreading was standard in Britain, the mayor grew concerned over the cost it would involve to rebuild the city and ordered that the surrounding structures be left intact.” This suggests that in order to prevent the huge splurge of money on the reconstruction of buildings, the king allowed the buildings to catch fires without pulling them.

Answer explanation: “At the hands of architects such as Christopher Wren, most of London was rebuilt using stone and brick, materials that were far less flammable than wood and straw.” This suggests that the buildings were made up of stones and bricks after the Great Fire of London.

Answer explanation: “As insurance became a profitable business, companies soon realized the monetary benefits of hiring men to extinguish fires.” This implies that in order to prevent the renovation of the destroyed houses due to fire, the insurance company started hiring people.

Answer explanation: “Though the firemen were well paid, they were constantly on duty and thus obliged to call their fire station home for both themselves and their families.” This implies that the firemen involved in the Metropolitan Fire Brigade were living at the fire station.

Answer explanation: “Leather hoses with couplings that joined the lengths together were hand-sewn in the Netherlands and used until the late 1800s when rubber hoses became available.” Hence, the hoses were not made by machines but rather were hand-sewn.

Answer explanation: “The technology for steam engine fire trucks was available in Britain and America in 1829, but most brigades were hesitant to use them until the 1850s. It was the public that eventually forced the brigades into putting the more efficient equipment to use. In the early 1900s, when the internal-combustion engine was developed, the trucks became motorized.” This implies that the steam engines and fire trucks were used from 1850 to the early 1900s.

Answer explanation: No such reference regarding World War Ⅰ has been given in the passage. 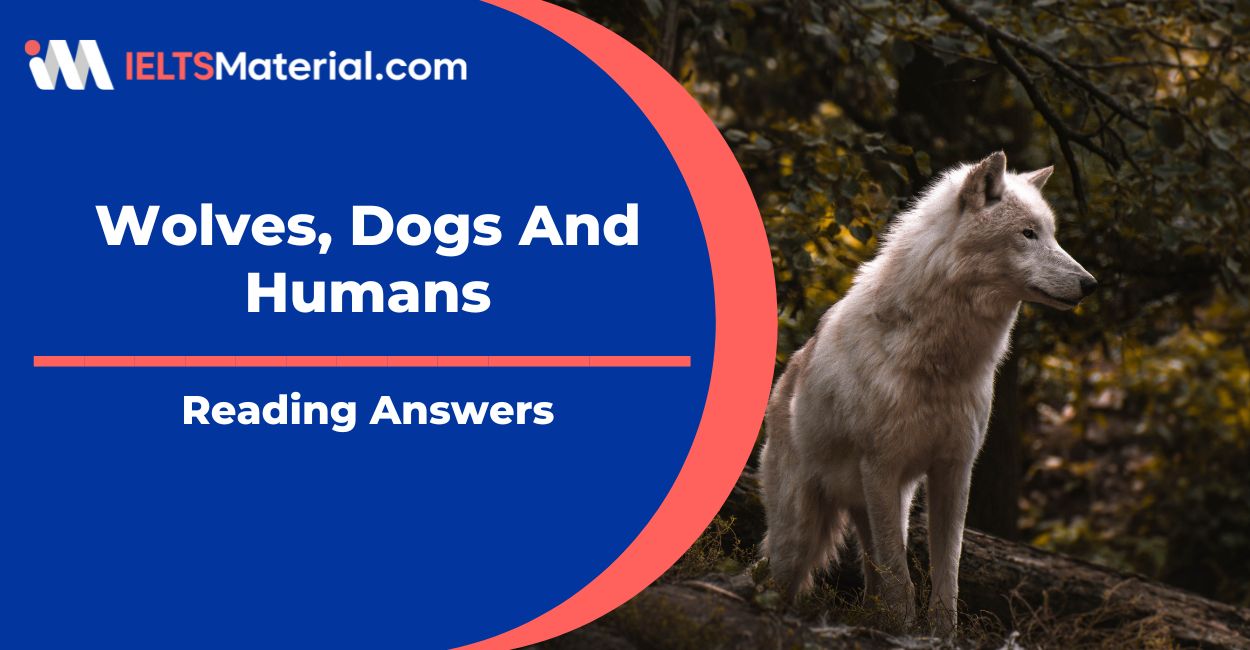 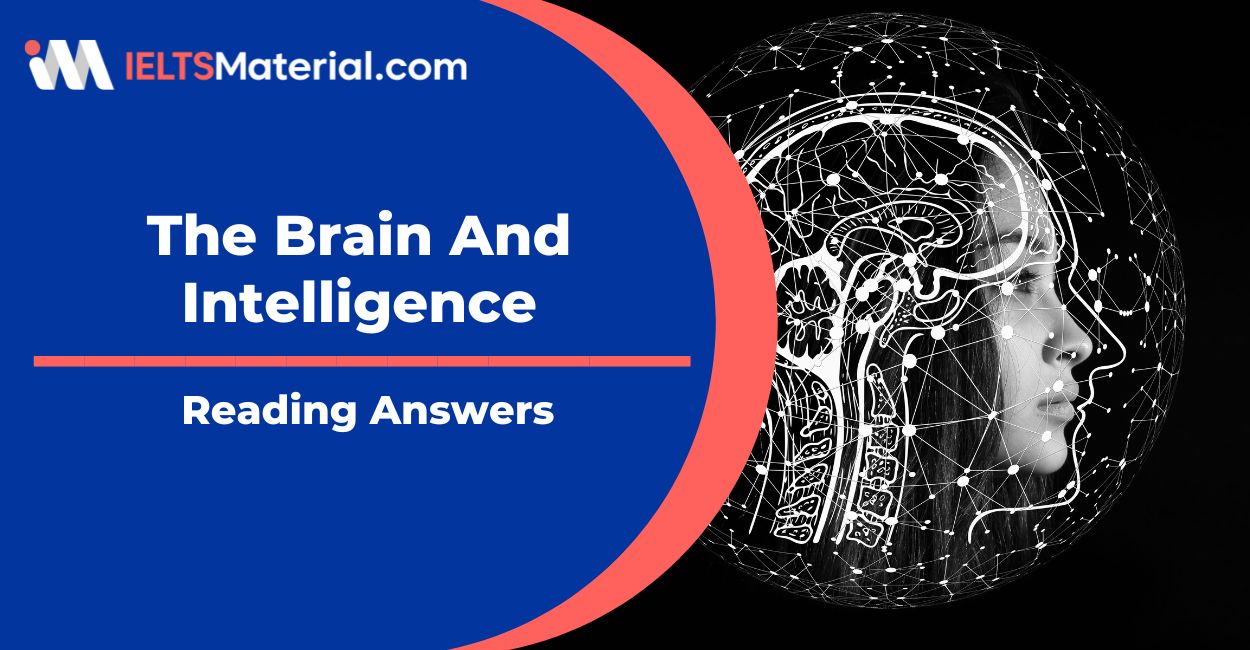 The Brain And Intelligence Reading Answers 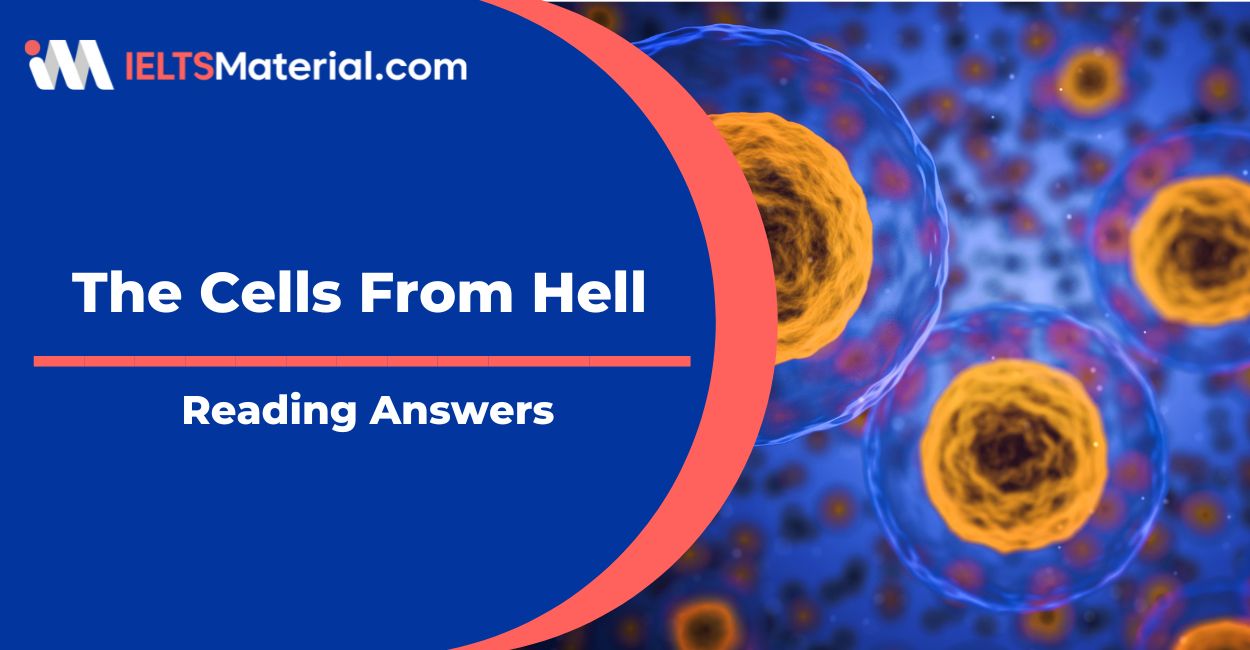 The Cells From Hell Reading Answers 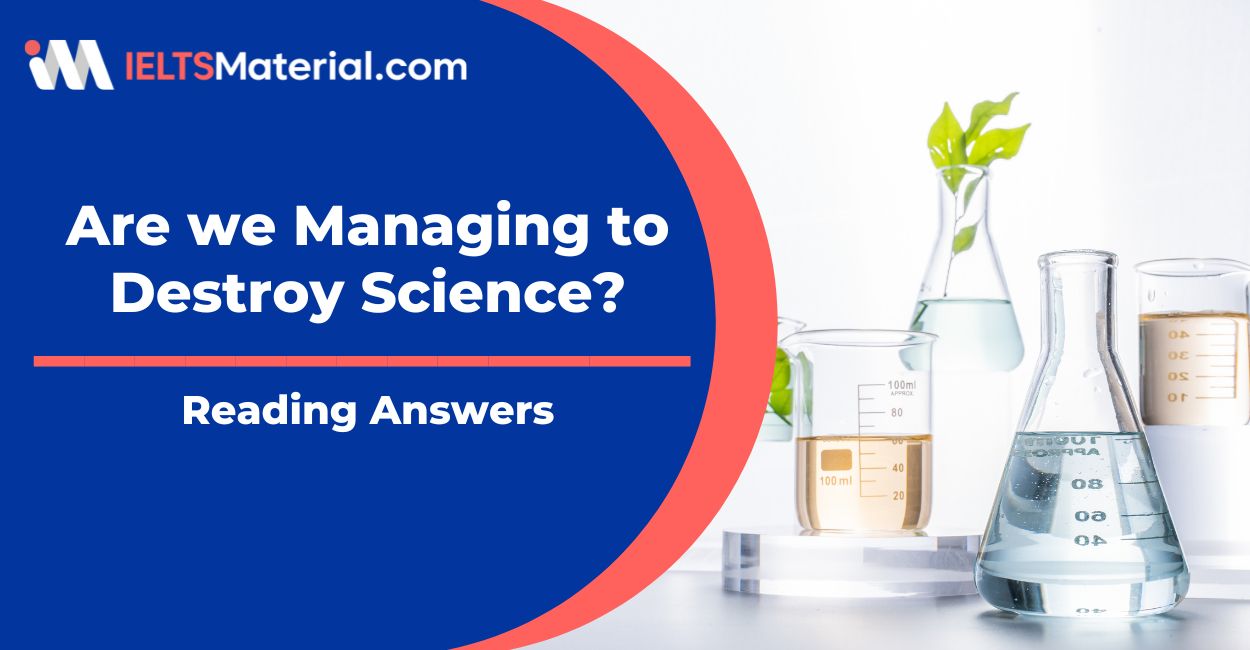 Are we Managing to Destroy Science? Reading Answers